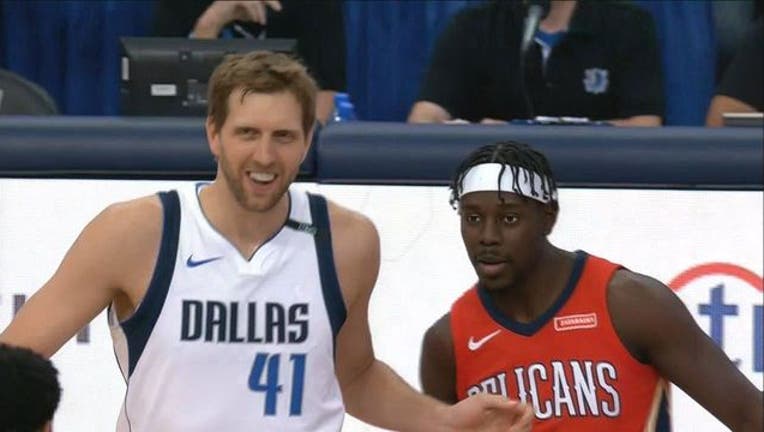 DALLAS (AP) - Jrue Holiday scored 30 points, Nikola Mirotic added 24 in a rare start and the New Orleans Pelicans won their eighth in a row, 126-109 over the Dallas Mavericks on Sunday night.

On a night when his jumper wasn't falling, Anthony Davis had 23 points and 13 rebounds, scoring most of his points from inside 5 feet.

Holiday scored 19 in the first half as the Pelicans held a double-digit lead for most of the last three quarters, save for one fleeting Dallas run at the start of the fourth.

New Orleans has averaged 127 points during its streak and cleared 118 in all eight games.

Dirk Nowitzki scored a season-high 23 points for the Mavericks, passing Elvin Hayes for eighth all-time in field goals with 10,980.

Dallas opened the fourth quarter on a 9-0 run to get within 91-87, with Kyle Collinsworth scoring on a three-point play and Nowitzki and J.J. Barea hitting 3-pointers. After calling timeout, New Orleans answered with 10 straight points, including 3s by Holiday and Mirotic.

Dennis Smith Jr. also scored 23 for Dallas, which has lost three straight and 17 of 21.

Nowitzki scored 11 points in the first quarter, including a 3 at the buzzer, but New Orleans led 33-25 after one.

Holiday took advantage of the smaller Dallas guards to get inside, scoring 19 in the first half. Mirotic hit three 3s in a 19-8 run to start the second quarter, which gave the Pelicans their biggest lead at 19.

Dallas got within 10 in the third quarter and had the ball, but Smith threw away an outlet pass, and Davis and Ian Clark scored all of the Pelicans' points in a subsequent 12-4 run.

Pelicans: Emeka Okafor sat out with a sprained right ankle. It was just the third time Okafor has not played since signing with the Pelicans on Feb. 3 after five seasons out of the NBA. "It's just one of those things that it's better to have one more day to recover from than stick him out there," coach Alvin Gentry said. Mirotic started in Okafor's place.

Mavericks: The Mavericks were without Wesley Matthews, who had a left hip injury. ... Scotty Hopson, signed Monday to a 10-day contract, saw his first action for the Mavericks after entering the game with 4:57 left in the first quarter. ... Coach Rick Carlisle said it's possible Dorian Finney-Smith could return to action later this week. Finney-Smith has missed 55 games with left quadriceps tendinitis.

Pelicans: At the Los Angeles Clippers on Tuesday.