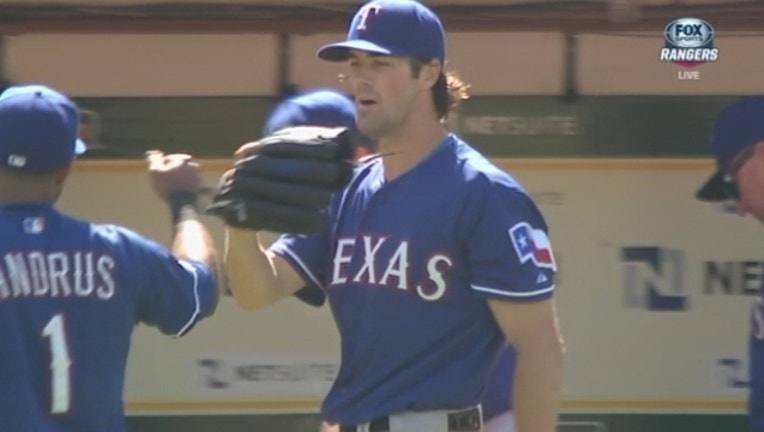 The Rangers moved a season-high 14 games over .500 and extended their lead to 3 1/2 games over the idle Astros in the AL West. Texas heads to Houston to begin a three-game series on Friday.

Hamels (11-8) gave up an unearned run in the second but was otherwise stellar while improving to 5-1 in 10 starts with the Rangers. Hamels allowed four hits, walked three and struck out two.

Texas turned four double plays in the first five innings and outscored Oakland 26-10 in the series.

Beltre drove in Texas' first run with an RBI single off A's starter Chris Bassitt in the first. He had a two-run single in the sixth when the Rangers scored three times and batted around.

DeShields added an RBI single in the sixth to make up for his error in the second that led to Oakland's only run when he dropped Jake Smolinski's two-out fly ball to short center.

Reddick, who singled then stole second and third, scored on the error.

Fielder hit a two-run home run off Cody Martin in the eighth.

Bassitt (1-7) gave up three runs and six hits in three innings. He walked one and struck out three in his first start since Aug. 26.

Athletics: RHP Edward Mujica (right hamstring strain) threw off a mound on Wednesday, and manager Bob Melvin said it's possible that the veteran reliever could pitch again this season.

Rangers: RHP Yovani Gallardo (12-11) pitches the series opener in Houston trying to avoid matching his career high for losses. Gallardo, who has dropped his previous two starts, lost 12 games in 2009.

Athletics: RHP Sonny Gray (13-7) will start against San Francisco on Friday. Gray beat the Giants in his only other career start against them on July 8, 2014.