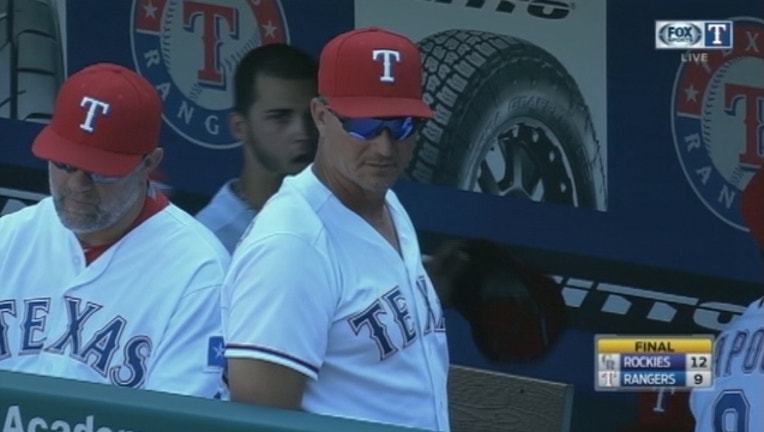 ARLINGTON, Texas (AP) — Pinch-hitter Carlos Gonzalez delivered a bases-clearing double that capped a five-run rally in the eighth inning and the Colorado Rockies held on this time, beating the Texas Rangers 12-9 Thursday.

The AL West-leading Rangers had won five in a row.

After David Dahl drew a bases-loaded walk from hard-throwing Matt Bush with two outs to tie it at 9, Gonzalez doubled into the left-center gap. The three-run drive came in his first appearance since he sprained an ankle Monday night.

The Rockies had lost three in row to Texas, which had scored the deciding runs in the eighth inning or later in each of those victories.

Texas trailed 4-0 early, but got even at 7 when Adrian Beltre and Mitch Moreland hit back-to-back homers to start the seventh. Elvis Andrus had an RBI double later in the inning after twice failing to get down a bunt, and another run came home on Ian Desmond's grounder to make it 9-7.

But Colorado regained the lead in the eighth when lefty Jake Diekman (3-2) gave up a walk and consecutive singles to left-handers before Bush relieved him.

Scott Oberg (1-1), the third of five Rockies pitcher, got the win despite allowing two runs in his inning. Adam Ottavino struck out the side in the ninth for his first save.

Charlie Blackmon homered, doubled and singled twice. The Colorado leadoff man crushed a 455-foot homer to center on the second pitch of the game, had an RBI double in the fourth.

Rougned Odor had an RBI triple and a two-run homer for the Rangers. His 22nd homer in the fourth got Texas within 6-5.

The game took 4 hours, 3 minutes to play. ... The temperature listed on the scoreboard reached as high as 105 degrees. ... The announced attendance of 20,720 was the smallest for a Rangers home game this season.

Rockies: 1B Mark Reynolds left the game during an at-bat in the seventh inning after apparently hurting himself on a swing. ... RHP Chad Qualls, out since July 16 because of colitis, said he has lost 16 pounds but is now on a normal diet. He is scheduled to make injury rehab appearances for Triple-A Albuquerque on Saturday and Monday.

Rangers: LHP Derek Holland said he felt great after throwing 55 pitches in three innings of a rehab start for Triple-A Round Rock on Wednesday night. Holland, on the 60-day disabled list with shoulder inflammation and eligible to return Aug. 20, throws for Round Rock again on Monday.

Rockies: Rookie right-hander Jon Gray (8-5) starts the series opener at Philadelphia. He had won three straight starts before going only 3 2-3 innings Sunday at Miami in his shortest outing of the season.

Rangers: Yu Darvish (2-3) is winless in five starts since returning from the disabled list a month ago, but is coming off seven scoreless innings in a no decision at Houston on Sunday. The right-hander is 5-0 in five career starts against Detroit.