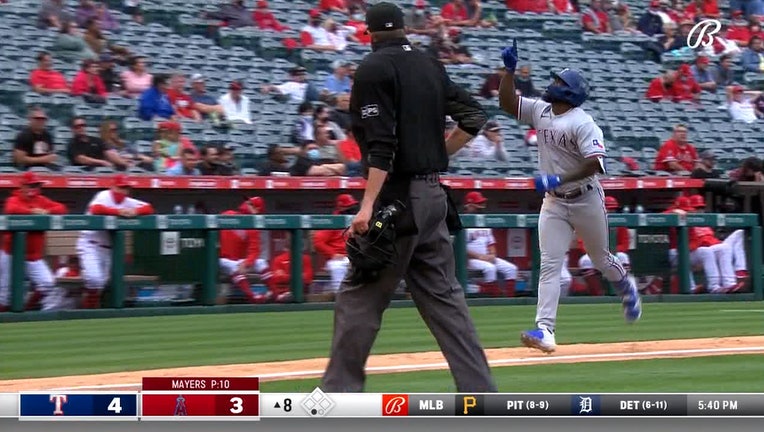 ANAHEIM, Calif. - When Adolis García came up in the eighth with two runners on and the Rangers down two runs, Texas manager Chris Woodward leaned over to his coaches.

"I said, ‘It’s a pretty easy way to become an instant fan favorite if he hits a home run right here,’" Woodward recalled with a big grin. "And he hit a home run on the next pitch."

It's still early in the flowering of García's big league career, but the Rangers already think they've got something special in the Cuban slugger who propelled them to yet another dramatic win in Anaheim.

García hit a go-ahead, three-run homer in the eighth inning, and the Texas Rangers rallied from a late two-run deficit for a 7-4 victory over the Los Angeles Angels on Wednesday.

García has only been up in the majors for a little over a week, but he’s already putting together an incredible collection of big hits in key situations. The 28-year-old designated hitter has five extra-base hits in the last eight games, including the first three homers of his major league career — all of them in clutch situations.

His 411-foot homer off Mike Mayers (1-1), punctuated by a bat flip and a joyous run to first, tops his impressive list of accomplishments during his first significant big league action since 2018.

"It’s an amazing feeling," García said through a translator. "Coming off the bat, I knew. It’s uncontrollable to feel that when I knew it would put us ahead. ... I’m just trying to live my dream and enjoy it. As long as it goes, that’s all I’m really thinking about."

García defected in 2016, and he never really got a sustained chance in the majors during three seasons with St. Louis. After getting his shot with Texas this month, he has joined Jurickson Profar and Billy Sample as the only players in Rangers history to put the team ahead with each of their first three big-league homers.

Nate Lowe also homered immediately after García's drive for the Rangers, who have won six of nine after jumping on Los Angeles' bullpen for six late runs to take two of three at Angel Stadium.

Joey Gallo drew a bases-loaded walk in the ninth from Junior Guerra, who balked in another run.

Mike Trout, Shohei Ohtani, Justin Upton and José Iglesias hit solo homers for the Angels, who have lost four of six after their bullpen had a meltdown evoking memories of last season's terrible relief group.

John King (2-0) got Trout to ground out with the bases loaded to end the seventh before the Angels' bullpen misadventures began.

José Quintana pitched five innings of two-hit ball with eight strikeouts in a marked improvement on his previous starts for the Angels. The left-hander walked four, but allowed just one run and mostly avoided the trouble that left him with a 16.20 ERA after his first two appearances.

"Felt way better than last time," Quintana said. "I felt more competitive inning by inning. It was a good outing. I needed it."

Mike Foltynewicz yielded three runs and seven hits over six innings for Texas, striking out six. Although he was mostly happy with his first career start against the Angels, Foltynewicz lamented the Halos' long balls.

Trout hit his sixth homer this season in the first inning, clobbering a first-pitch sinker with his new aggression at the plate. The blast was the three-time AL MVP's 40th in 163 career games against the Rangers.

Ohtani added a 402-foot shot in the third inning, and Upton connected in the fourth after breaking his bat over his knee in frustration after his first at-bat.

"It's just like, ‘Hey, welcome to Anaheim,’" Foltynewicz said.

Rangers: The medical staff came out to talk to Foltynewicz after he struck out Upton in the sixth. Foltynewicz swung his arm in circles, but finished the inning.

Angels: 3B Anthony Rendon (groin) took grounders before the game. He could return this weekend in Houston. ... Upton's legs began cramping in the eighth, and Jose Rojas replaced him in left field in the ninth. Maddon said the veteran felt fine afterward.

Rangers: After an off day, Dane Dunning (1-0, 0.60 ERA) faces his former team when Texas opens a three-game series at the White Sox on Friday. Dunning moved to the Rangers in the trade that sent Lance Lynn to Chicago. "It's going to be exciting," Dunning said. "I know practically every person on that team. It’s going to be really cool being able to throw (to) my old buddies, old teammates."