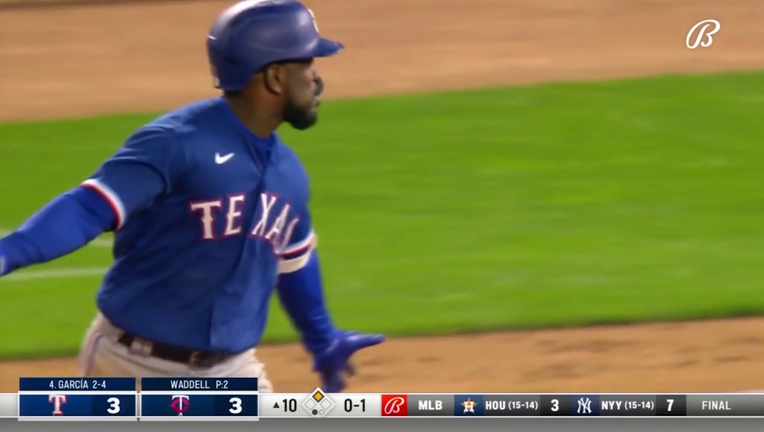 MINNEAPOLIS - Adolis García hit a two-run homer in the 10th inning to complete the Texas Rangers' comeback in a 6-3 win against the Minnesota Twins on Tuesday night.

García had three hits, including his seventh home run, and three RBIs.

Kyle Gibson, making his first start against his former team, gave up three runs and three hits with eight strikeouts.

Joely Rodríguez (1-1) struck out two in a perfect ninth, and Ian Kennedy gave up a leadoff single before getting a strikeout and game-ending double-play grounder for his eighth save in as many chances.

Shortstop Andrelton Simmons managed to track down Kiner-Falefa's fly but with Simmons' back turned to the plate, Culberson raced home.

Byron Buxton hit a two-run homer in the first inning for the Twins. Willians Astudillo added a solo home run, but Minnesota only had only four hits.

Rangers: INF Brock Holt was placed on the 10-day IL with a right hamstring strain. INF Andy Ibáñez's contract was selected from Triple-A Round Rock, and he made his major league debut with a pinch-single in the ninth. … RHP Kohei Arihara played catch Tuesday and reported no pain in his right middle finger, but he will not start on his regularly scheduled day on Wednesday. Arihara will throw a bullpen session on Thursday and would tentatively start on Saturday if he suffers no discomfort. … C Sam Huff (right knee surgery) was moved from the 10-day to the 60-day IL.

Twins: IF/OF Luis Arraez was placed on the seven-day IL with concussion-like symptoms. Arraez sustained the injury in a home-plate collision in Monday’s game. To replace Arraez, Minnesota recalled INF Nick Gordon from Triple-A St. Paul. … RHP Michael Pineda won’t start in his scheduled slot on Wednesday as he deals with a wrist injury. Pineda could possibly start on Thursday with the rest of the rotation pushed back a day. … Rookie Alex Kirilloff was held out of Tuesday’s lineup with a sore wrist.

Minnesota will recall LHP Lewis Thorpe (0-0, 3.60 ERA) from Triple-A to start Wednesday’s game. Thorpe pitched in two games earlier this season for the Twins. Texas will counter with LHP Hyeon-Jong Yang (0-0, 2.08). Yang will be making his first major league start after he allowed two runs in two relief appearances over 8 2/3 innings. Yang, 33, played 14 seasons in South Korea before signing with the Rangers in February.