The Forth Worth Young Men's Leadership Academy overcame not having a home court to make history during a pandemic season.

FORT WORTH, Texas - The goal for the Fort Worth Young Men’s Leadership Academy basketball team is the same as every other playoff contender.

But winning is just a byproduct of what the YMLA Wildcats are accomplishing.

"It’s not just about basketball, it’s about making sure these kids are productive citizens when they do graduate," said YMLA head coach Hosea Lee.

"Coach always embraced to us that nothing’s going to be fair," said senior guard Jordan McClendon. "There’s always going to be some kind of thing that makes you who you are."

The program has been around since 2016. Building it up has taken pure will.

"We’re always at a disadvantage so whatever we get, we’re appreciative of it," said Davis.

Unlike the teams they face, the Wildcats have never had a home court.

"We never know when we’re going to have practice," said McClendon. "It’s always a text message – oh we’re practicing here at such and such time."

Added Davis: "Not having a court at our school, it’s tough. We have to drive to make sure we get [to practice], get good work in – whether we’ll be practicing [at McClung Middle School] or sometimes at the [Fort Worth] Boys & Girls Club. We just make sure whatever gym we can get in, we just work hard." 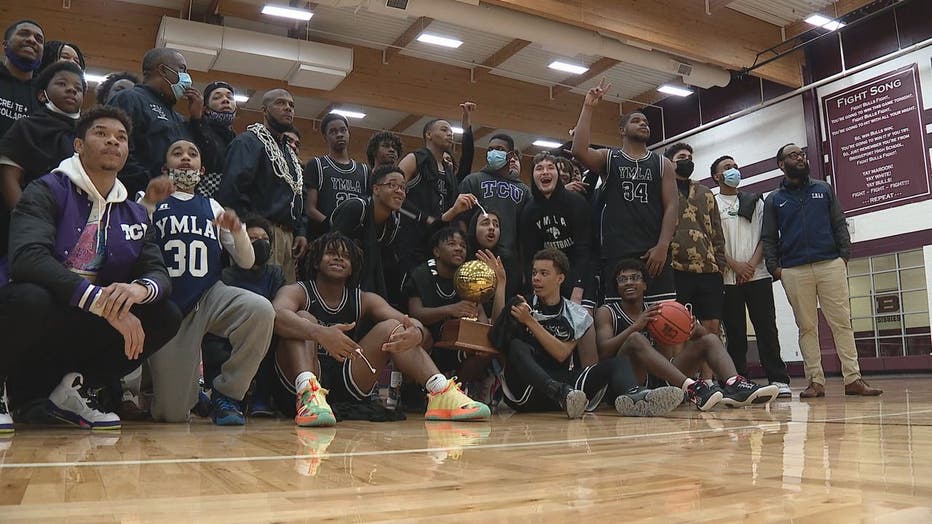 The YMLA basketball team posing for the cameras after their second playoff win.

Up until two years ago, YMLA played every single game on the road. Now they play their home games at McClung Middle School.

"This is not necessarily our home but we’ve made it our home," said McClendon.

"Home court advantage is really any court we play at," said Davis. "Whether it be away, whether it be home, we have the same approach to every game."

On top of not having a court on campus, YMLA faced an uphill battle as a magnet school joining the UIL. Because of certain rules, the Wildcats had to play against class 5A and 6A teams over the past four seasons, even though YMLA only had the enrollment of a 2A school.

In year one, the Wildcats took their bruises – finishing with a 3-23 record. Since then the team has won more and more games, with an anytime, anywhere state of mind.

This year, YMLA dropped down to class 4A and finished first in its district, with an undefeated record against its district rivals.

This week the Wildcats won the first playoff games in school history, beating Bridgeport, 67-60, in overtime, then knocking off Burkburnett, 89-74.

"I wouldn’t necessarily say it’s a Cinderella [story]," said Lee, after the Wildcats’ win over Burkburnett. "But I mean if everybody wants to call it that, then we don’t want this dream to end."

Through all the adversity, the YMLA Wildcats are still standing.

The team is winning in the classroom, with a collective 3.6 GPA and all 10 seniors on track to go to college next year.

On the court, their goal of winning a state title is still in front of them.

And even if that dream doesn’t come true, the young men who’ve built the YMLA basketball program will take home a mindset worth more than any trophy.

"[That] really anything is possible," said Davis. "Everything’s just not going to be handed to you. You’ve got to work hard, you’ve got to put in the work, you’ve got to do things outside of the norm to get where you’re trying to be at."