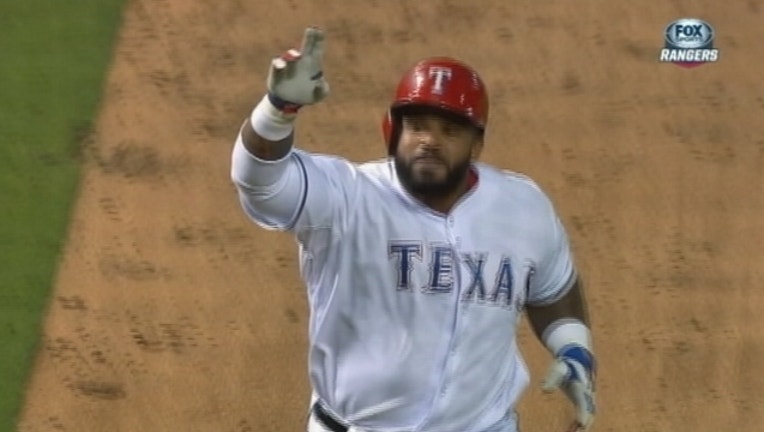 ARLINGTON, Texas (AP) -- The Rangers moved within a half-game of AL West leading Houston, when Prince Fielder hit a tiebreaking, two-run homer in the eighth inning to lead Texas to a 5-3 win over the Astros on Monday night in the opener of a pivotal four-game series.

Mitch Moreland hit his team-leading 20th home run for Texas, which has won four straight against the Astros and leads the season series 9-4.

Fielder's homer came on 3-2 pitch from Will Harris (5-4). He had two hits and scored three times.

Keone Kela (7-5) got the win, retiring one of two batters, and Shawn Tolleson earned his 32nd save in 34 attempts.

The Astros' Jose Altuve hit Cole Hamels' sixth pitch of the game for his 12th homer of the year.

In a matchup of high profile left-handers acquired in late July, neither Hamels nor Houston's Scott Kazmir earned a decision.

Jake Marisnick doubled with one out in the fifth inning, touching first base with his left hand. He advanced to third on a balk by Hamels and beat a throw to the plate on George Springer's hard grounder to first.

Hamels was called for the balk when he appealed that Marisnick missed first base.

Marisnick, starting in place of injured Carlos Gomez, scored by sliding head first and touching the outside of the plate with his left hand to avoid the tag by Chris Gimenez.

Hamels allowed three runs over seven innings, throwing 114 pitches. That is the most since he threw 129 in his July 25 no-hitter over the Cubs in his final start for the Phillies before being traded.

Hamels was the third of five consecutive left-handers that Houston will face on this trip.

Astros: Lowrie was hit by a pitch in the first inning and left after four innings with a left shin contusion.

Rangers: OF Shin-Soo Choo was in the starting lineup after leaving Sunday's game after eight innings with neck stiffness.

Astros RHP Collin McHugh (16-7) has won his last three starters. His career record against Texas is 3-0 with a 1.89 ERA, two wins coming this season.

Rangers LHP Derek Holland (3-2) was moved up a day to pitch on his usual four days' rest. He has a 2.97 ERA in seven starts since coming off the disabled list in late August.