FRISCO, Texas - For the first time since March, FC Dallas played at Toyota Stadium with fans in the stands.

Major League Soccer started with a tournament earlier this summer at Disney World, but FC Dallas was forced to drop out because of a COVID-19 outbreak.

Many precautions were taken before being able to enter Toyota Stadium Wednesday. Fans say watching a game in person was worth the possible risk with COVID-19.

It’s been more than 150 days since FC Dallas played a match in Frisco and in front of fans. The organization has been preparing Wednesday by sanitizing and putting safety guidelines in place.

Wednesday's match against Nashville is the first time since the return of sports that a major league team has hosted a game with fans in the stands.

The coronavirus was on the minds of multiple soccer fans, but it didn’t stop them from coming. 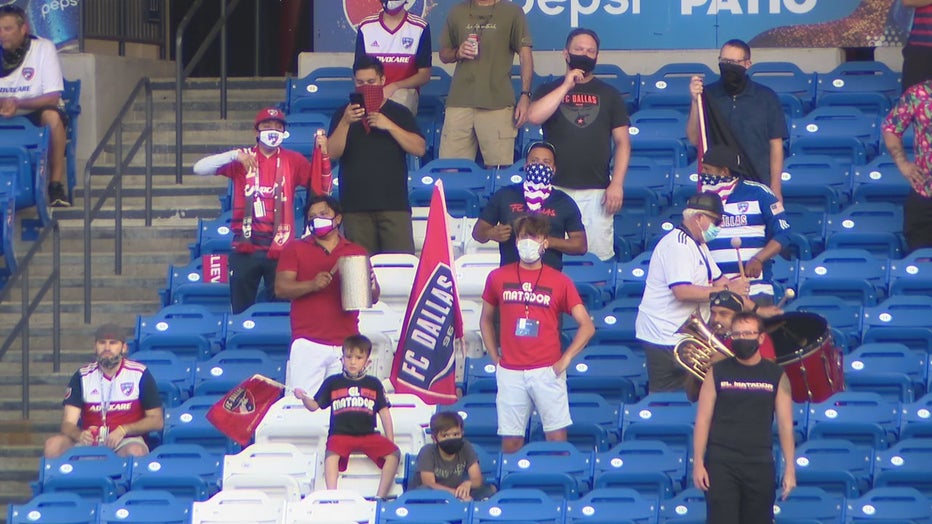 “You’re going to take a risk going to the grocery store or a restaurant. I don’t feel any difference,” said fan Daniyel Temesvary. “I’m a teacher. We are going to be around it regardless. I don’t want to take a risk, but you got a put yourself out there.”

Toyota Stadium officials said a maximum of 3,000 people could attend. Masks were mandatory while inside, and three seats separated people from other groups. Concessions in the stadium were also cashless in an effort to not have hand to hand contact.

Wearing a mask and sitting six feet apart from others is not normal in sports. Many say they'll take the precautions to watch the game they love.

“You see all the other sports, baseball, basketball, they’re playing with a bunch of cardboard cutouts,” said fan Roel Gutierrez. “It’s good for them to have us here. It’s more important for them than us.”