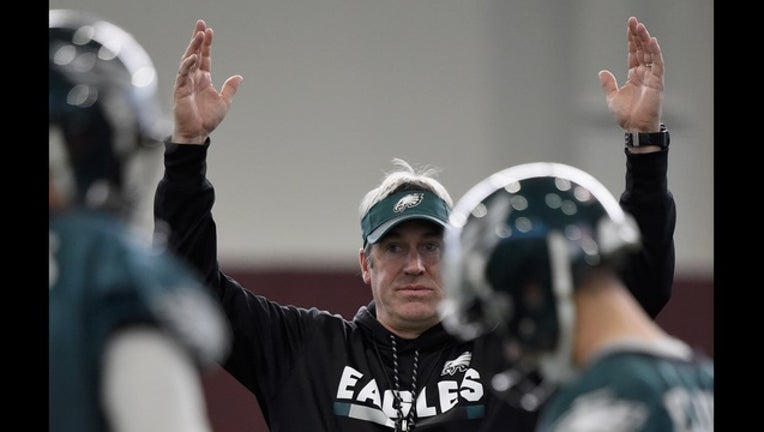 Head coach Doug Pederson of the Eagles celebrates a made field goal as Donnie Jones and Jake Elliott look on during Super Bowl LII practice on February 1, 2018 at the University of Minnesota in Minneapolis. (Photo by Hannah Foslien/Getty Images)

BLOOMINGTON, Minn. (AP) - The best formula for success against the New England Patriots is to keep Tom Brady on the sideline and harass him when he's on the field.

That's not a news flash. But the good news for Eagles fans and everyone rooting against Brady, Bill Belichick and the Patriots in Sunday's Super Bowl is that Philadelphia has the ingredients to do it.

The Eagles (15-3) have a multidimensional, ball-control offense capable of chewing the clock and forcing No. 12 to be a spectator.

Jay Ajayi, former Patriots running back LeGarrette Blount and Corey Clement led the NFL's third-best rushing offense and the Eagles were first in time of possession.

"You have to stay patient and diligent there," Eagles coach Doug Pederson said. "That's something we've been able to do all season long. It's something we stay committed to."

This isn't an old-school, ground-and-pound offense, either.

The Eagles have a versatile passing attack with several receivers who create matchup problems. Carson Wentz threw for 3,296 yards and 33 touchdown passes before he tore his ACL in Week 14 and Nick Foles has eight TD passes, including playoffs.

Foles proved in the NFC championship game he can make quick-strike plays with three passes of 40-plus yards against the league's top-ranked defense. Two of those were TD tosses of 53 yards to Alshon Jeffery and 41 yards to Torrey Smith.

Foles has been adept at making the right calls on run-pass option plays, making it even more difficult for defenses facing Philadelphia.

"It's hard because you have to defend every inch of the field," McCourty said. "Each guy has to do their job on the play. We can't have guys doing things that don't fit the defense."

On the opposite side of the ball, defensive coordinator Jim Schwartz has an aggressive unit. Nobody runs on Philadelphia's defense. It was No. 1 against the run and didn't allow a 100-yard rusher until Ezekiel Elliott had 103 in Week 17 against backups and third-stringers.

The Patriots (15-3) rely mainly on Brady's arm, even though Dion Lewis had 896 yards rushing and James White was a Super Bowl hero last year. But Brady can't throw if he doesn't have time and the Eagles have a dominant front four led by Fletcher Cox and Brandon Graham.

The line often generates enough pressure that Schwartz doesn't have to blitz much and there's enough depth with Chris Long, Vinny Curry, Tim Jernigan and Beau Allen that guys stay fresh in the fourth quarter.

Safety Malcolm Jenkins is a physical presence in the secondary and cornerbacks Ronald Darby and Jalen Mills are solid cover guys.

If the game comes down to a field goal, rookie kicker Jake Elliott has a strong leg. He kicked a 61-yarder at the end of regulation to beat the Giants in Week 3 and is 6 of 7 from beyond 50 yards.

The Eagles shouldn't be tight and they're not intimidated by the Patriots. They're a loose, relaxed group that has embraced their underdog role throughout the playoffs and overcame injuries to several key players.

"Greatest quarterback of all time, but that doesn't mean that he's unbeatable," Jenkins said of Brady. "We're not worried. We match up well."