It comes three decades late but Cowboys great Drew Pearson will finally be going to the Pro Football Hall of Fame. It was announced over the weekend.

Getting into the Pro Football Hall of Fame is rare and special, but Drew Pearson’s journey there was unlike most.

From his long wait, to how he found out, and who was there when he got the news that.

As Pearson put it, it all means "immortality."

"I’ve always wanted this, for a long time," Pearson said after learning he was being inducted into the Pro Football Hall of Fame.

It’s been 37 years since he retired from the NFL, and a publicly painful wait for the Cowboys legend.

"It’s definitely a weight lifted off your shoulders, because through the whole process, people have always been asking me, ‘Why aren’t you?’ And for a long time, I thought my first name was why aren’t you? Because every time they’d come up to you and ask, ‘Why aren’t you in the hall of fame?’" Pearson said.

Having his quarterback, Roger Staubach, in the room when he learned of his selection was only right.

Not only given their connection on the football field, helping Dallas to three Super Bowls and a world title, but also because of their friendship since.

"Our relationship has carried over into the business world, into our personal lives, and to have him after coming through the way I did, him supporting me day one, and to have him there, you couldn’t have done it any better," Pearson said. 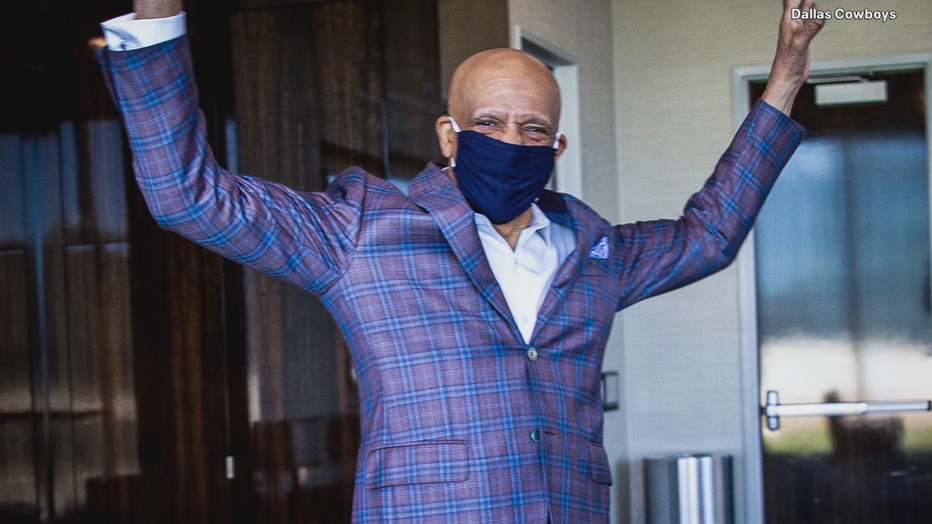 So when Pearson’s moment of finding out was shown during the NFL Honors broadcast Saturday night, it was kind of surprising how surprised he was.

As it turns out, that moment happened a few weeks ago, with a well-executed plan at The Star in Frisco, when Cowboys owner Jerry Jones invited Pearson and Staubach for a "real estate" meeting.

"Jerry Jones is sitting there and we come in, he says a few words, they’re talking, and next thing you know, you hear that knock on the door and Jerry asks me to go open to door, and bam," Pearson recalled.

Drew Pearson is heartbroken no more.

Now, and forever, the original 88 is a member of the Pro Football Hall of Fame.

"I promise, I’ll live up to what the Hall of Fame is all about, and now you’re giving me a chance at immortality," Pearson said.

Pearson got measured for his on Saturday, and made a very important decision, he’s going with the big afro…

Pearson and the six other members of the class of 2021 will be inducted in Canton in August.

He was joined in the Class of 2020 by Peyton Manning, Charles Woodson, Calvin Johnson, John Lynch, Bill Nunn, and Alan Faneca on Satuday.