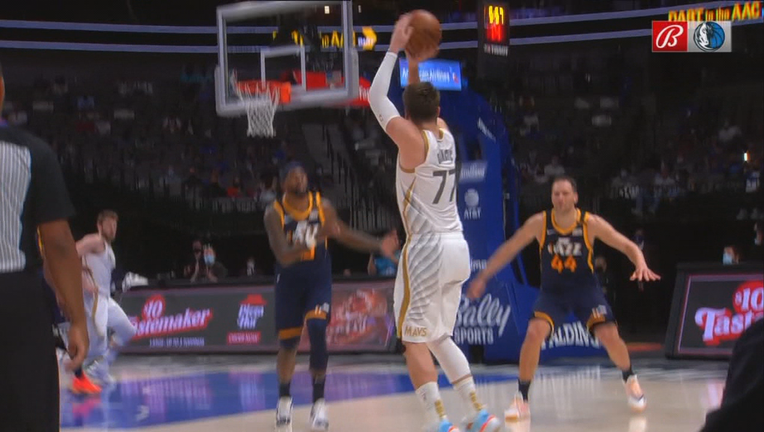 The NBA-leading Jazz had their nine-game winning streak halted.

Jalen Brunson scored 20 points, Josh Richardson 17 and Tim Hardaway Jr. 16 as Dallas won for the first time in three games versus Utah this season. Kristaps Porzingis, Dallas’ No. 2 scorer and leading rebounder, sat out with a sprained right wrist.

Mavericks coach Rick Carlisle was pleased to hold the NBA’s No. 3 scoring team, averaging 117.2 points going in, to its lowest point total since Feb. 7 after losing the previous two games in the season series at Utah in late January.

"To hold these guys to 103 is a hell of a job," Carlisle said. "The difference was we just came out and we were much more physical than we were last time we played them. That was a long time ago; that was light years ago."

Mike Conley scored 28 points to lead the Jazz, who trailed by as many as 18 points. Donovan Mitchell, Bojan Bogdanovic and Jordan Clarkson scored 16 each, and Rudy Gobert had 14 points and 15 rebounds.

Dallas beat Utah at its long-range game. The Mavericks were 23 for 49 from behind the arc; their highs this season from behind the arc are 25 makes and 50 attempts. The Jazz, who were leading the NBA averaging 17.1 3-pointers per game and ranked second hitting 39.8% from long range, went 12 for 44 (27.3%). They were 9 for 23 in the first half. Likewise, they previously led the league holding opponents to 30.5 3-point attempts and 10.4 made from long range.

"For us to lose that game only by eight, that says a lot about us," said Mitchell, who went into play averaging 25.6 points and scored only four in the first half while shooting 2 for 13 from the floor and 0 for 5 on 3-pointers. "The biggest thing is not to overreact."

Jazz coach Quin Snyder cited both his team’s off shooting night and the Mavericks’ defense for the low percentage of 3-pointers.

"When we were able to move the ball, really attack and get in the lane, we created some," Snyder said.

In the Mavericks’ losses to the Jazz in January, they led for 19 total seconds, in one of the games, by one point. On Monday, they moved ahead during a 7-0 run less than four minutes in and never trailed again.

"Everyone had confidence," Doncic said. "Any NBA team can beat you … obviously this one, they’re first in the West or second, so obviously it’s a big win."

Conley, a first-time All-Star this year in his 14th NBA season, was a steady voice following Utah’s first loss since March 18, at Washington.

Dallas has won 19 of its last 26 games to move a season-best seven games over .500. … It was Mitchell’s first road game since he declined to remain with the team last Tuesday when its initial charter flight to a game in Memphis returned to Salt Lake City after striking a block of birds during takeoff, damaging the plane and its left engine. … Porzingis was activated on Jan. 13 following offseason knee surgery and has missed nine games, with the Mavericks going 4-5. … Nicolo Melli made his second straight start for Dallas and was scoreless in 32 minutes with four fouls, but was selected the club's defensive player of the game by the team.