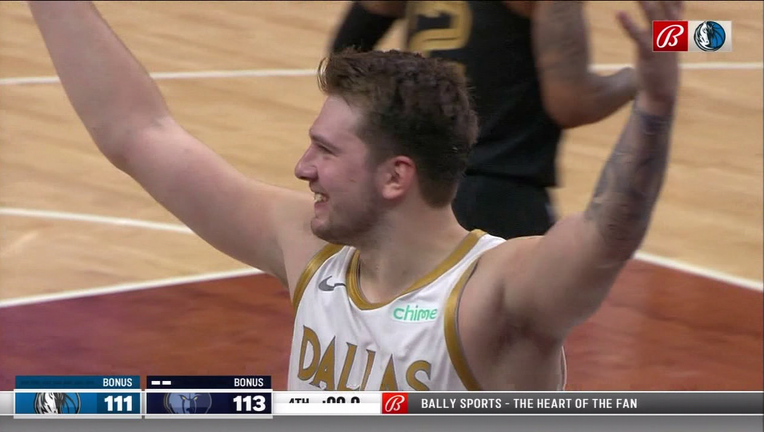 MEMPHIS, Tenn. - Luka Doncic hit a leaning, lunging 3-pointer as time expired to give the Dallas Mavericks a 114-113 victory over the Memphis Grizzlies on Wednesday night.

Grayson Allen led the Grizzlies with 23 points, but the 90.6% free throw shooter missed a pair of foul shots with 2.2 second lefts, setting the stage for Doncic’s winning 3 in the matchup of teams jockeying for postseason positioning.

The Mavericks, sitting in seventh place in the West, gave themselves a bit of a buffer with the victory – extending their advantage to 2 1/2 games over the eighth-place Grizzlies.

The teams played closely in the first half, both shooting near 50% from the field and taking care of the basketball with minimal turnovers. Allen scored 17 points in the half to help Memphis to a 60-57 lead at intermission.

Porzingis had 12 points for Dallas, missing only one of his six shots in the half.

Doncic, who struggled in the first half, scored 14 in the third quarter, but Memphis still maintained a 89-83 lead heading into the final period.

Mavericks: Played their only road game out of a stretch of nine games. ... Improved to 17-12 on the road. ... Max Kleber passed Hubert Davis in the first quarter for 17th on the Mavericks career 3-pointers list. Davis, recently hired as North Carolina's head coach, had 306.

Grizzlies: Open a seven-game road trip on Friday in Chicago.