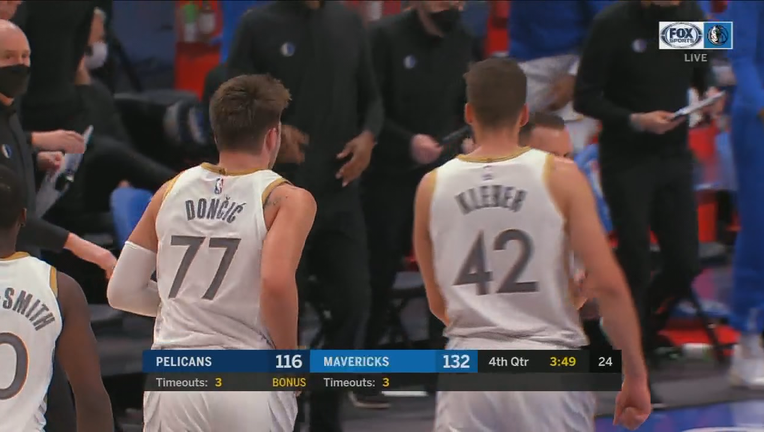 DALLAS (AP) - Luka Doncic couldn't miss from 3-point range during a brief, sizzling stretch in the third quarter — the same way Zion Williamson was perfect the entire first half.

Doncic scored a career-high 46 points, Kristaps Porzingis added 36 and the Mavericks overcame Williamson's career-best 36 points in a 143-130 victory over the New Orleans Pelicans on Friday night.

Doncic, who also had 12 assists and eight rebounds, connected on three of four Dallas 3-pointers in just 93 seconds as the Mavericks made 13 of their first 15 shots in the third quarter. The Mavericks matched their season best with a fourth consecutive victory and beat the Pelicans for the fifth straight time.

"Luka was phenomenal. (Porzingis) was phenomenal," Dallas coach Rick Carlisle said. "Williamson was ridiculous. I mean, unbelievable, what he can do on the basketball floor. The ESPN crowd got a real treat tonight in terms of entertainment. But it was a pillow fight on defense."

Brandon Ingram scored 30 for the Pelicans in what was supposed to be the second meeting with Dallas this season. The first, scheduled for Jan. 11, was postponed because of COVID-19 issues.

The Pelicans gave up a franchise-record 25 3-pointers for the second consecutive game. Chicago made 25 in its 129-116 victory two nights earlier.

"It's because we're playing abhorrent defense," coach Stan Van Gundy said. "Our defense is ridiculous. We tried everything tonight. Two games in a row like this is inexcusable for me as a coach and for the players it's inexcusable."

Porzingis, who finished three points shy of his most since coming to Dallas in the blockbuster trade with New York in 2019, set a career high for any half with six 3-pointers before halftime.

"Tonight was one of those games where things were just clicking for both of us," Porzingis said. "He was finding me open on the 3-point line. It gives both of us energy and just builds the momentum for both of us and the team."

Doncic, who tied his career high of 42 in a recent scoring showdown with Golden State star Stephen Curry, was 17 of 30 from the field, including 5 of 8 from 3, and went 7 of 9 on free throws. The Slovenian sensation, the third overall pick in the 2018 draft, has won both meetings with Williamson, the top choice from a year later.

"Sometimes the trust can be there and a team just hits tough shots," Williamson said. "I think Luka went on a run there where he hit like four or five tough, contested 3-pointers. There's not really a defensive scheme you can do there. That's just a great player hitting tough shots."

Josh Richardson, who had 11 points and six rebounds, hit the other 3 for Dallas' first double-digit lead during Doncic's hot streak from beyond the arc in the third quarter.

Pelicans: New Orleans lost a second straight game coming off a four-game winning streak, the longest of the season. ... Eric Bledsoe made all four of his 3-point attempts and scored 16 points. ... Lonzo Ball had 12 points and seven assists.

Mavericks: Dallas finished above 50% shooting for the third consecutive game while improving to 7-0 when scoring at least 120 points. ... Dorian Finney-Smith scored 14 points on 4-of-5 shooting from long range.

Doncic tied a franchise record shared by Mark Aguirre (1983-84) and Dirk Nowitzki (2005-06) with his 13th consecutive game of at least 25 points. The 21-year-old has at least 10 assists in all seven of his career 40-point games. That’s the most such games to start a career in NBA history.

Pelicans: The third game on a four-game road trip is Sunday at Detroit. The teams split the two-game series last season, but the Pelicans have won 13 of the past 16 meetings.

Mavericks: The Trail Blazers visit Sunday in the sixth game of a seven-game homestand. The last nine meetings have been decided by single digits. Portland's Damian Lillard scored 61 points in the most recent meeting in the Florida bubble.