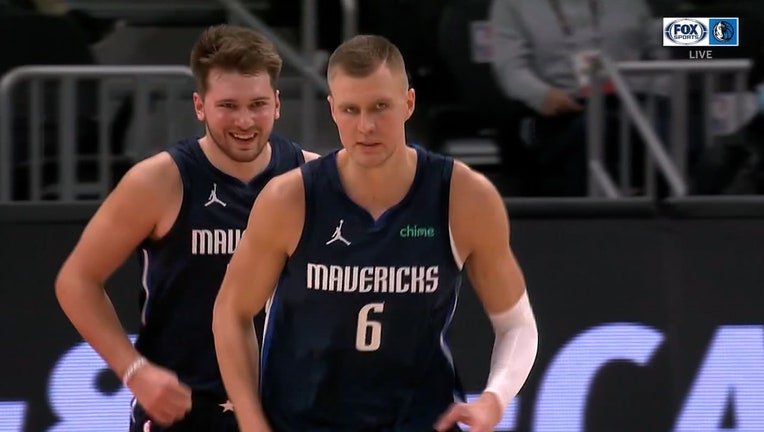 Kristaps Porzingis added 24 points and 11 rebounds for the Mavericks, including a crucial tip-in of a miss by Doncic with 32 seconds remaining that helped Dallas hold off a furious Atlanta comeback.

Winning was a big relief for the Mavericks.

"It wasn't perfect," Doncic said. "But we got the win, and that's all that matters to me. We were so happy after the game. It's been a tough stretch."

With Dallas players hassling him the length of the court and coming at him with frequent double-teams, Young needed a late flourish to reach 21 points on 8-of-18 shooting. He had nine assists and four turnovers.

"They were denying Trae the ball from pretty much the second we inbounded it," said Kevin Huerter, who also had 21 points for the Hawks. "They made it tough on him."

Doncic came up just two rebounds shy of another triple-double.

After a game that was tight for three quarters, the Mavericks pulled away at the start of the fourth and held on to snap their longest losing streak since a seven-game skid from March 2-14, 2019.

Tim Hardaway Jr. pushed the margin to double digits for the first time all night with a pull-up jumper that gave the Mavericks a 95-85 lead with 10:14 remaining.

Doncic pulled off another of

Atlanta keeps struggling at the most crucial points of the game. Nine of their 11 losses have been by less than 10 points.

"That's been out Achilles heel a little bit," Collins said. "We've got to continue to work on it as a young team."

The Mavericks have been careful with Porzingis' minutes, still mindful of the knee injury he sustained in last year's playoffs.

The 7-foot-3 Latvian wants coach Rick Carlisle to be a little more generous with the playing time — especially in the first quarter. They've talked about an expanded role.

"I feel it's best to play the whole first quarter," Porzingis said. "Especially coming back from an injury. It's hard to get into a rhythm playing four minutes here, five minutes there."

Collins turned in a big night without a single trip to the foul line.

"I honestly feel like with how athletic I am, it's hard for the referees to judge what's a foul, what's not a foul," he said. "It says my game is real. To do it without getting to the line, those are all real buckets."

Mavericks: Dallas also snapped a seven-game losing streak in Atlanta. ... The Mavs have won three of five games against the Hawks in the Doncic-Young rivalry. ...

Hawks: Capela extended the NBA's longest active streak of games with at least 10 rebounds to 17 in a row before halftime. He finished with 14 boards. ... Capela's double-digit rebounding streak is the longest by an Atlanta player since Dwight Howard’s 19-game run in 2017.