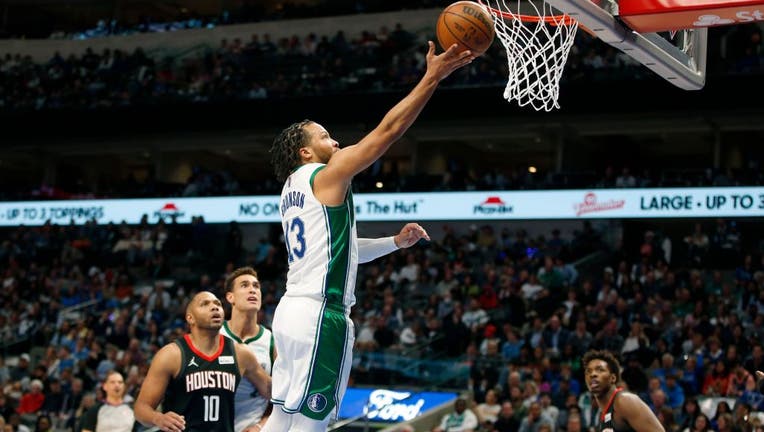 DALLAS, TEXAS - MARCH 23: Jalen Brunson #13 of the Dallas Mavericks drives to the basket in the second half against the Houston Rockets at American Airlines Center on March 23, 2022 in Dallas, Texas. (Photo by Tim Heitman/Getty Images)

DALLAS - Jalen Brunson scored 28 points and Spencer Dinwiddie added 26 with Luka Doncic resting a sore right ankle, and the Dallas Mavericks overwhelmed the Houston Rockets in the second half for a 110-91 victory Wednesday night.

The victory pulled Dallas even with Utah at 45-28 for the fourth seed and home-court advantage in the first round of the Western Conference playoffs. The Jazz, who lost 125-97 at Boston, currently hold the tiebreaker over the Mavericks. They play Sunday in Dallas.

Rookie Alperen Sengun had 14 points and 11 rebounds and Christian Wood scored 12 points with 10 boards in the 11th consecutive road loss for the Rockets, who have the worst record in the NBA at 18-55.

Dinwiddie had 19 points by early in the second quarter, and Brunson scored 16 in the third as the Mavericks quickly went in front for good after trailing 53-52 at halftime. Dallas outscored Houston 58-38 in the second half.

The previous game Doncic missed, that time because of a sore foot, became Dinwiddie's first start with the Mavericks since coming from Washington in the trade that sent Kristaps Porzingis to the Wizards.

Dinwiddie had his Dallas (and season) high of 36 in that 114-113 victory over Sacramento on March 5. He and Brunson were the starting backcourt pairing again with the Mavericks needing to keep pace in a tight West playoff race against an overmatched opponent.

"I think me and Spencer have been comfortable since he got here," Brunson said. "It kind of just slowed as soon as he was inserted into the lineup. It’s a credit to him for being a great teammate coming in here and just wanting to win."

The Mavericks swept the season series (4-0) from the Rockets for the first time since consecutive seasons in 2010-11 and 2011-12. Those were were the final two seasons in Dallas as a player for first-year coach Jason Kidd, who was celebrating his 49th birthday.

"They make it hard on you to get good shots," Houston coach Stephen Silas said. "We have to learn how to create good shots against a good defensive team with our pace, with our actions, with our spacing. We didn’t do that tonight."

Dallas went on a 13-3 run to start the fourth quarter for the first 20-point lead.

"We talked about the energy," Kidd said. "At halftime, we talked about the communication was a little silent. A lot of times Luke will create that energy shooting the ball or making plays. We had to find that. We did a good job in the second half on both ends."

Rockets: F Anthony Lamb signed a two-way contract, but will stay with Rio Grande Valley in the G-League for now. Lamb played 24 games for the Rockets last season. ... The Rockets lost all four games against Dallas by double digits. ... Jae'Sean Tate scored 13 points.

Mavericks: F Davis Bertans missed his second consecutive game with right knee soreness. ... The Mavericks have won four straight games in the Houston series for the first time since their series-best streak of nine consecutive victories from 2010-13.

Rockets: The first of consecutive games on back-to-back nights in Portland on Friday. One victory by the Trail Blazers will give them the season series for the fourth straight year.

Mavericks: At Minnesota on Friday, four nights after the Mavericks held on for a 110-108 victory over the Timberwolves in Dallas. The Mavericks can clinch the season series with a victory.