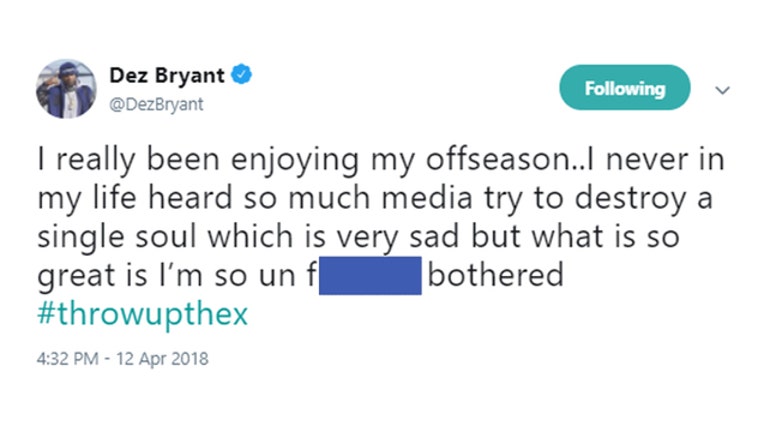 Cowboys wide receiver Dez Bryant went on a tweeting spree the day before a meeting with Cowboys owner Jerry Jones about his future with the franchise.

"I really been enjoying my offseason," Bryant tweeted Thursday evening. "I never in my life heard so much media try to destroy a single soul which is very sad but what is so great is I'm so un [expletive] bothered."

Bryant also retweeted and commented on tweets from fans responding to his original tweet.

When one Cowboys fan wished him good luck, Dez said, “I'm still getting myself together...that's the only thing on my mind.”

He then summed up his thoughts: "The take from today.. I’m bothered because I said publicly I’m unbothered That’s a huge wow take 2 I’m ranting and going off on the media whenever I’m just being normal Dez in my everyday life.. I can only control what I can control is what I tell myself...again unbothered"

Bryant and Jones will meet on Friday to discuss the wide receiver’s contract. It’s not known if the team will ask Bryant to take a pay cut or potentially release him from his contract.