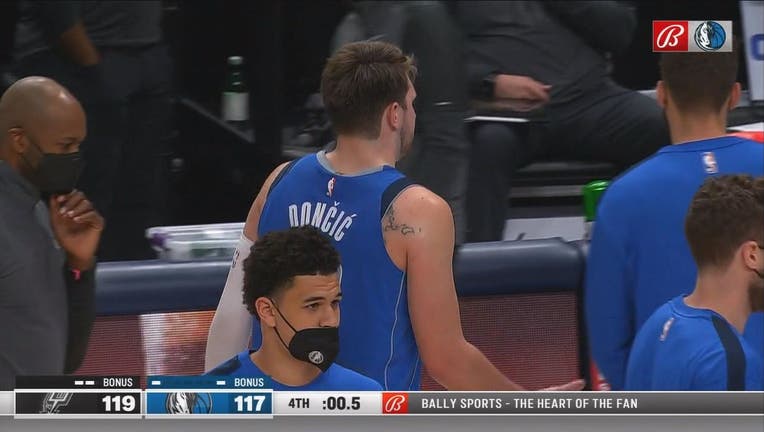 DALLAS - DeMar DeRozan hit the tiebreaking jumper with 0.5 seconds left, giving him 27 of his 33 points in the second half and lifting the San Antonio Spurs to a 119-117 victory over the Dallas Mavericks on Sunday night.

Dejounte Murray scored 25 points as the Spurs stopped a season-long five-game losing streak while avoiding the first season sweep by their Texas rival in the 41-year history of the Dallas franchise. The Mavericks won the first two meetings.

Luka Doncic scored 29 points, including a basket for the 10th tie with 19 seconds left in a game that also had 12 lead changes.

On the winning play, DeRozan came around a screen but still had just one defender on him in Dorian Finney-Smith as Doncic peeled off the play.

"DeMar is our scorer," coach Gregg Popovich said. "He has taken a lot of responsibility all year long. He’s got courage. He misses some of them. He makes some of them, just like everybody through the ages. He just comes back and does it again."

Kristaps Porzingis had 31 points and 15 rebounds before fouling out for Dallas, which has followed up two straight victories over strong playoff contenders with losses to struggling Texas rivals.

Dallas was coming off a win over Milwaukee, which was without Giannis Antetokounmpo. The previous loss to Houston came after a victory over NBA-leading Utah.

"We're a team that's still learning some lessons about keeping our guard up, navigating through a very busy schedule," Dallas coach Rick Carlisle said. "It's not an excuse. It's just a fact. We've come a long way."

DeRozan and Jakob Poeltl converted three-point plays around two more free throws from DeRozan on an 8-0 run for a 113-104 lead before the Mavericks later scored six straights points to get within one.

Dallas was down four after another three-point play from DeRozan, which drew the sixth foul on Porzingis, before Doncic hit a pair of free throws and got a chance at the tying shot after DeRozan missed a corner 3-pointer.

After DeRozan's shot, Doncic wasn't close on a desperation 3 from near midcourt to beat the buzzer.

Mavericks: C Willie Cauley-Stein was active after missing 12 games because of COVID-19 protocols. ... F Maxi Kleber was out for the third time in five games because of right lower leg soreness. ... Josh Richardson scored 16 points.

Lonnie Walker IV was quiet for most of three quarters in his second game back after missing nine with a sore right wrist. Then he was busy, scoring all 13 of his points in the final 13-plus minutes.

"You know he's going to spark us, do something that gives us the energy that we need," DeRozan said. "Him getting a dunk like that is just a prime example of what Lonnie can do for this team."

Carlisle returned to the post-game virtual meeting with reporters to clarify the Dallas defense on the final play. He said it was his decision to have Finney-Smith guard DeRozan without any help. "That's on me," he said.

The biggest lead for both teams was nine, with the Spurs having that edge after starting the fourth quarter on an 11-2 run. The Mavericks got within one before the Spurs pushed it back to nine again. Dallas' nine-point lead came late in the first half, but it was gone within the first three minutes of the third quarter.

Spurs: The fourth game of a five-game trip is Monday in Orlando. San Antonio held the Magic to their season scoring low in a 104-77 victory a month ago.

Mavericks: JJ Redick could make his Dallas debut against one of his former teams with Philadelphia making its only visit Monday. Dallas acquired the shooting guard at the trading deadline two weeks ago.