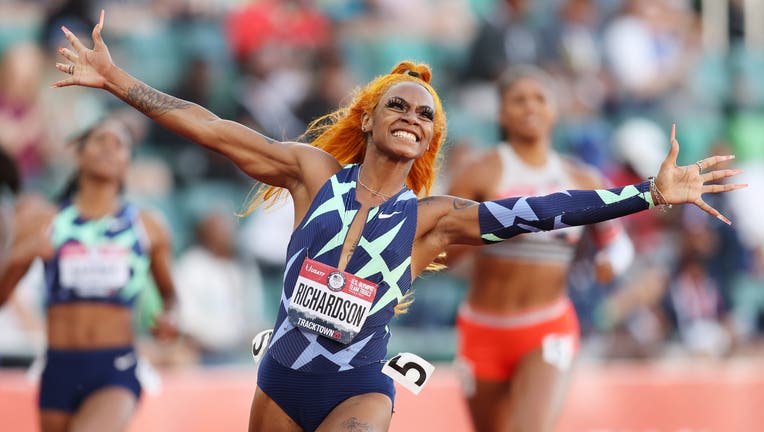 Dallas-Fort Worth will be well represented at the Olympic games. One of the emerging stars is Dallas Carter product Sha’Carri Richardson.

Richardson breezed to a win in the 100 meters at the U.S. Olympic track and field trials Saturday night to secure her spot at the Tokyo Games. She finished in a time of 10.86 seconds, followed by Javianne Oliver and then Teahna Daniels.

According to the Associated Press, the 21-year-old Dallas native who turned pro after her freshman year at LSU is big on hair color, just like two-time Olympic champion Shelly-Ann Fraser-Pryce of Jamaica.

"It's loud and encouraging and, honestly, dangerous," Richardson said when asked why she chose the color orange for her big night. "Knowing I'm coming to one of the biggest meets there is, if you're going to out there and be the best, you need to look the best."

She said crossing the finish line first was only the second-best feeling of the night. The best came afterward when she climbed halfway up the stands at Hayward Field and shared a long hug with her grandmother, Betty Harp, who's also known in the family as "Big Momma."

"To be able to have her here at the biggest meet in my life, and to cross the finish line and run up the steps to hug her knowing I'm an Olympian, actually that's probably better than winning the race," Richardson said.

When questioned about the importance of her family, Richardson also revealed that her biological mother died last week. She did not give details on the loss.

"I'm still here. Last week, finding out my biological mother passed away and I'm still choosing to pursue my dreams, still coming out here, still here to make the family that I do have on this Earth proud," she said, according to Yahoo! Sports. "And I'm highly grateful to them. Without them, there would be no me. Without my grandmother, there would be no Sha'carri Richardson. So my family is my everything. My everything until the day I'm done."

The favorite entering the meet, Richardson is now on a list of American champions that includes world-record holder Griffith Joyner.

She told the Associated Press she also draws inspiration from Joyner, which is a reason why she wears her nails so long.