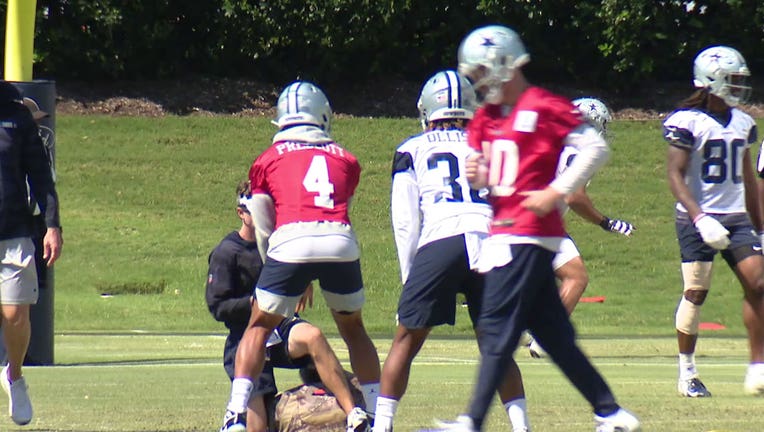 FRISCO, Texas - Dallas Cowboys quarterback Dak Prescott is getting closer to returning to the field from his fractured thumb.

Prescott was spotted lightly throwing passes with his injured right hand during Thursday's Cowboys practice, without a brace on his thumb.

Cooper Rush and Will Grier took all the snaps during the portion of practice open to cameras and reporters.

The Cowboys QB fractured the thumb on his throwing hand during the Week One game against the Tampa Bay Buccaneers.

Prescott had the stitch in his thumb removed before Monday night's game against the Giants.

In an interview with Audacy's 105.3 The Fan this week, Cowboys owner Jerry Jones said Prescott could be able to play within a week or two. Jones said Prescott's timeline to return will depend on his ability to grip and throw the ball.

Backup Cooper Rush led the Cowboys to wins over the Bengals and Giants. The Central Michigan product is expected to start Sunday against the Commanders. Rush is 3-0 all time as a starting quarterback.

You can watch the Cowboys take on the Commanders on Sunday at noon on FOX 4.