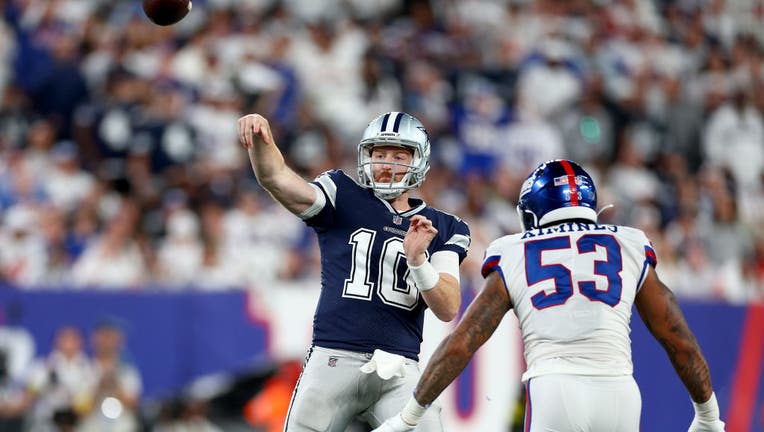 EAST RUTHERFORD, NEW JERSEY - SEPTEMBER 26: Cooper Rush #10 of the Dallas Cowboys throws a pass against Oshane Ximines #53 of the New York Giants during the fourth quarter in the game at MetLife Stadium on September 26, 2022 in East Rutherford, New J

"He's certainly playing as well as anybody could have expected," Jones said Tuesday on Audacy's 105.3 The Fan. "There is no question he understands this offense. He has the makeup of a top quarterback."

Rush rode a strong effort from the Cowboy defense and led a comeback against the New York Giants on Monday to move to 3-0 in his career as a starter.

Rush completed 21 of 31 passes for 215 yards and one touchdown against the Giants.

Jones credited the Cowboys offensive line and running game for helping Rush and says he's doing exactly what you want a backup to do.

"The purpose of the backup quarterback in the NFL is to be able to step in and have your team function on all of the cylinders without having to give up some of your offense," Jones told Shan and RJ. "He's doing a great job, and he doesn't have anybody that is supporting him more than Dak [Prescott]."

Prescott had stitches removed from the broken thumb on his throwing hand on Monday, and the quarterback wouldn't rule out returning for Sunday's game against the Washington Commanders.

Jones avoided any quarterback controversy talk on Tuesday, saying Prescott is advancing in his recovery.

"I think his progress is nothing short of amazing," Jones said. "He'll be able to play within a week or two, he'll be able to, from the standpoint of risk to the injury. It's a question of if he will be able to grip and throw the ball."

You can watch the Cowboys take on the Commanders on Sunday at noon on FOX 4.