LUSAIL, Qatar (AP) — Cristiano Ronaldo was dropped from the starting lineup for Portugal’s match against Switzerland on Tuesday in the round of 16 of the World Cup.

The move came a day after his coach expressed frustration about Ronaldo’s attitude in the last game. Gonçalo Ramos, a 21-year-old forward who made his international debut three weeks ago, made his first career start for Portugal as Ronaldo’s replacement at Lusail Stadium. 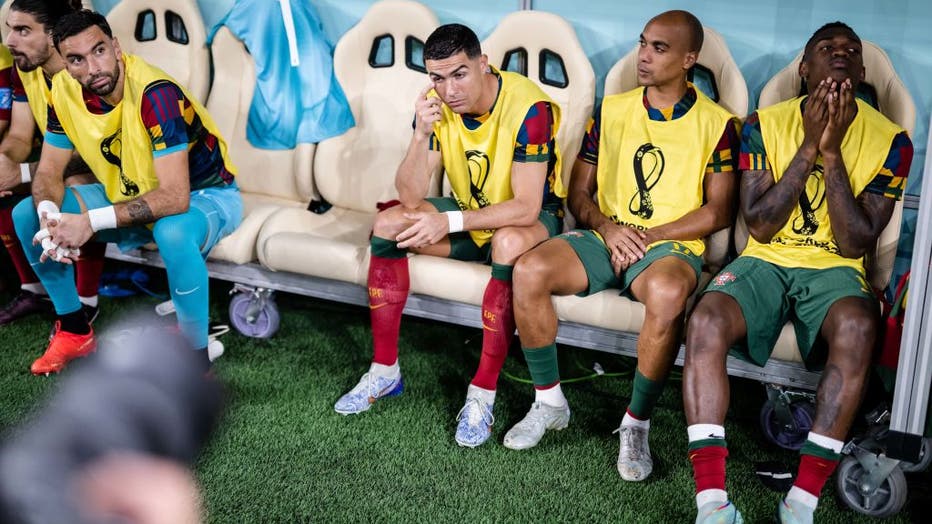 LUSAIL CITY, QATAR - DECEMBER 06: Cristiano Ronaldo (C) of Portugal looks dejected prior to the FIFA World Cup Qatar 2022 Round of 16 match between Portugal and Switzerland at Lusail Stadium on December 06, 2022 in Lusail City, Qatar. (Photo by Marku

And replace him he did.

Ramos scored his first World Cup goal on his fourth touch of the game in the 17th minute to give Portugal a 1-0 lead. Ronaldo received a loud cheer when he was shown on the big screen, expressionless, after Ramos’ goal.

It was the first time Ronaldo didn’t lead his teammates onto the field as the captain in Qatar, with Pepe taking up the armband. The 39-year-old defender then scored Portugal’s second goal, with Ronaldo running off the bench to hug the veteran near one of the corners.

Ronaldo had jogged onto the field for the pre-match warmup alone, after the starters, and was with the substitutes kicking the ball around with them in light drills. He was smiling when he returned to the locker room and paused for a photo with a female volunteer. He leaned down and draped his arm around her for the picture.

Ronaldo was still smiling when he came through the tunnel again ahead of the start of the game wearing a yellow substitutes bib. Ronaldo initially took an empty seat in the dugout and then took his place on the field for the national anthem. He received a rousing cheer that drew a smirk from the superstar when he was shown on the big screens inside the stadium.

This is expected to be Ronaldo’s final World Cup.

Ramos, who plays for Portuguese club Benfica, made his debut for Portugal last month in a warmup game against Nigeria and scored his first international goal. He replaced Ronaldo late in the opening World Cup match against Ghana, and again against Uruguay.

Ramos has scored 21 goals this year for Benfica.

João Cancelo, a fullback who started all three matches of the group stage, was also dropped from the starting lineup.

Ronald’s benching came after he showed obvious displeasure at being removed from the game against South Korea on Friday.

The 37-year-old striker opened the tournament with a goal against Ghana to become the first player to score in five different World Cups. But he was ineffective in Portugal’s final two games of group play and was pulled midway through the second half of a 2-1 loss to South Korea.

Ronaldo’s body language indicated the superstar was annoyed at being taken out of the game — something Portugal coach Fernando Santos remained silent about for nearly three days.

Finally in his Monday news conference, Santos conceded Ronaldo’s attitude in the game against South Korea was the one distraction — of many — that had pushed him too far.

Before Portugal’s first match of the World Cup, Ronaldo cut ties with Manchester United and is reportedly being wooed by a Saudi Arabian team with the promise of an exorbitant paycheck, and a poll in Portugal showed that fans in his home country wanted the superstar dropped from the lineup.

"I didn’t like it, not at all. I really didn’t like it," Santos said Monday of Ronaldo’s poor attitude at being taken out of the game against South Korea. "We fixed that in-house and that’s it."

Portugal defender Rúben Dias, meanwhile, pleaded with Portuguese media to help "create unity" in the camp instead of division. It was Portuguese daily O Bola’s poll that showed fans at home had tired of Ronaldo and preferred he didn’t play against Switzerland.

It’s not unprecedented for Ronaldo to get less playing time because the aging superstar has faded of late. He barely played in the Premier League for United through the first half of the season, and Santos dropped him from the Portugal lineup for a Nations League game against Spain in March.

With Ronaldo, Portugal has advanced to the round of 16 of the World Cup in four of his five tournaments, but he’s never played in a World Cup final. Portugal in 2006 lost to France in the semifinals — the deepest Ronaldo has ever reached at the World Cup.

Although he’s scored in five tournaments, he has only eight total goals in 20 World Cup matches. His 118 goals in international play is a world record for men, but Ronaldo has never scored in the knockout stage of the World Cup.

Lionel Messi, Ronaldo’s greatest rival over the years, has scored three goals so far in this World Cup and helped Argentina reach the quarterfinals. Messi has nine career World Cup goals, and like Ronaldo, has never won the tournament.