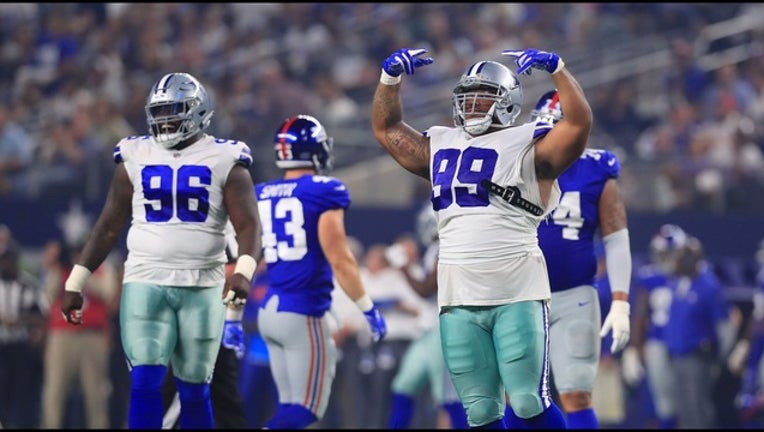 ARLINGTON, TX - SEPTEMBER 16: Antwaun Woods #of the Cowboys celebrates a second quarter sack of Eli Manning of the New York Giants in a football game at AT&T Stadium on September 16, 2018 in Arlington, Texas. (Photo by Tom Pennington/Getty Images

FRISCO, Texas (AP) - Sean Lee wants more time to decide if this is the best chance the Dallas Cowboys have to be defined by their defense in the linebacker's eight years with the club.

There's no question about the answer through two weeks.

The Cowboys (1-1) are fourth in the NFL in total defense, with a loss to Carolina that could have been a blowout and a win over the New York Giants that wasn't nearly as close as the seven-point margin.

In both cases, it was thanks to a defense that is delivering on preseason hopes of being a difference-making unit.

"I think we're starting to show the type of defense we can be," Lee said Thursday. "It's still early in the season. Still room to improve. Still a case we can cause and make more turnovers. But we're around the football. We're making plays. We're keeping points down, yards down."

Dallas is tied for second behind Chicago with nine sacks after bringing down Eli Manning six times.

The Cowboys visit Seattle on Sunday, and the Seahawks have allowed six sacks of Russell Wilson each of the first two games.

DeMarcus Lawrence, who finished tied for second in the NFL with 14½ sacks last season and ended up with the $17.1 million franchise tag, has a sack in each of the first two games. Three fellow defensive linemen had a sack apiece against the Giants.

For that and other reasons, Rod Marinelli is comfortable saying the Dallas defense has the most upside in his five seasons as defensive coordinator.

With all three gone within the past two years, the buzz drifted to the sensational 2016 rookie pairing of quarterback Dak Prescott and running back Ezekiel Elliott.

But the offense is in transition, with Prescott getting used to a revamped group of receivers following the retirement of Witten and release of Bryant in the offseason.

The Cowboys cruised against the Giants anyway, despite Elliott falling short of 100 yards rushing for the second straight week (78) and Prescott throwing for fewer than 200 yards for the eighth time in 10 games going back to last season.

"It's great when you see the defense going out there and doing what they're doing," Prescott said. "That gives the team a lot of confidence and the way they're playing allows us to want to go out there and do the same."

Lee is nursing a sore hamstring that sidelined him late against the Giants. The Cowboys are calling his limited approach in practice this week precautionary. But Dallas is also in a different place with its linebackers.

Jaylon Smith is starting to show the promise of his days at Notre Dame before a devastating knee injury in his final game with the Irish.

He leads the Cowboys with 16 tackles. Smith's emergence is allowing Dallas to bring rookie first-rounder Leighton Vander Esch along slowly.

The Cowboys like free agent pickup Joe Thomas, and fourth-year pro Damien Wilson forced a fumble on a sack of Manning.

"Feel good about that group right now," coach Jason Garrett said. "Obviously Sean's the leader. He's the leader of our defense. He's a great, great football player. But depth is important on your team."

As Lee mentioned, turnovers are lacking so far. The Cowboys have recovered two fumbles, but don't have an interception.

Still, they've been pleased with 2015 first-rounder Byron Jones making the switch back to cornerback. Chidobe Awuzie has been solid on the other side.

"We're very confident, not only in our ability but in our system and our coaching," safety Jeff Heath said.

"I just think we have the combination of guys to work really well together. We play for each other. I think you've been able to see some of the fruits of that."