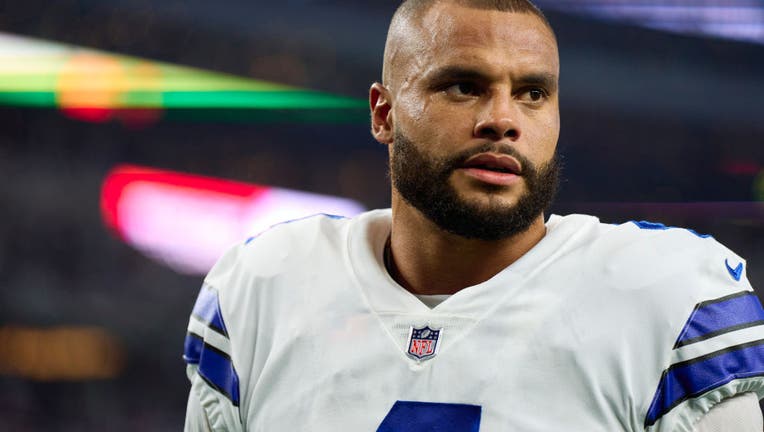 ARLINGTON, TX - SEPTEMBER 11: Dak Prescott #4 of the Dallas Cowboys warms up before kickoff against the Tampa Bay Buccaneers at AT&amp;T Stadium on September 11, 2022 in Arlington, TX. (Photo by Cooper Neill/Getty Images)

According to reports, the surgery was successful.

There's no official timeline for Prescott's return, but experts predict he will miss at least six to eight weeks.

He will spend the first two weeks healing from the surgery and then will begin physical therapy.

Cowboys owner Jerry Jones is optimistically hoping that he will only miss four games.

"We want him to be in consideration for playing within the next four games," Jones said on Audacy's 105.3 The Fan Tuesday morning. "We feel better about it than we did Sunday night."

Prescott injured his thumb during the team's disappointing season opener against Tampa Bay.

Head Coach Mike McCarthy is no stranger to leading a team without the starting quarterback. Prescott was out two years ago with an ankle injury, and he lost Aaron Rogers a few times as head coach in Green Bay.

"It's unfortunate but frankly my emotion goes to the person because I know how much these guys put into this. But yeah, it's all part of the challenge. It makes it even more sweeter when you get to where you wanna go," McCarthy said.

Five-year veteran backup quarterback Cooper Rush will now be a starter. He won his first and only regular-season start last season.

The team is also looking for another veteran to back him up.