Dallas Cowboys quarterback Dak Prescott will undergo surgery Monday after injuring his throwing hand at the end of Sunday night's embarrassing loss to the Tampa Bay Buccaneers. He's expected to be out for about six to eight weeks.

ARLINGTON, Texas - The Dallas Cowboys lost their first game of the 2022 season in an embarrassing fashion. Even worse, they lost their quarterback for the near future.

He hit the hand of Tampa Bay Buccaneers linebacker Shaq Barrett while making a pass late in the fourth quarter.

Prescott left the game because of the injury. He was checked on the sideline before jogging to the locker room.

"Thought I jammed it. I've hit my hand on helmets or bodies a lot in my career. The next play, realized I couldn't grip the ball," Prescott said after the game. "It's very disappointing. But injuries happen. Can't necessarily control it. Just unfortunate. Obviously gonna miss some time, not be there for my team and that's what hurts more than anything, especially after the start that we just put out there." 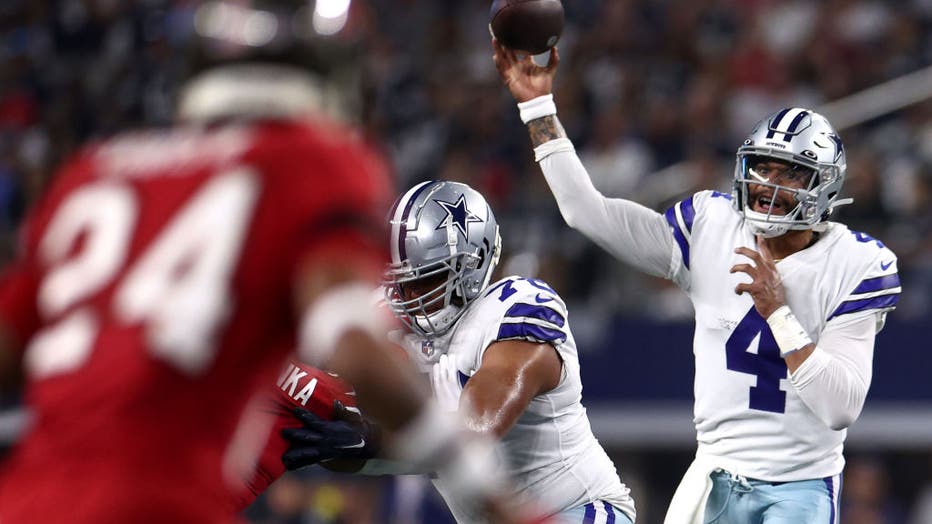 ARLINGTON, TEXAS - SEPTEMBER 11: Dak Prescott #4 of the Dallas Cowboys throws against the Tampa Bay Buccaneers during the first half at AT&amp;T Stadium on September 11, 2022 in Arlington, Texas. (Photo by Tom Pennington/Getty Images)

Jones said Prescott is set to have surgery on Monday and will likely be out for several weeks. ESPN reports he'll miss the next six to eight games.

"We thought we could have certainly more completions, thought we could run the ball more and better than we did. And that's the result of it. But to be very candid with you, all of that takes a back seat to the fact that as we go forward here for the next few weeks, we're gonna be going forward without Dak," Jones said.

Cowboys backup quarterback Cooper Rush will take over for Prescott for the foreseeable future.

"He's a guy who works so hard, battles through injuries, got back from the ankle. You know, he's the heart and should of the team and he's our leader. He'll grind through this one like he always does and he'll be back," Rush said.

The Dallas offense did not perform well with either quarterback on the field during Sunday night's 19-3 loss. The Buccaneers held the Cowboys to just 244 total yards and kept them out of the end zone.

The Cowboys will host the defending AFC champion Cincinnati Bengals next Sunday.