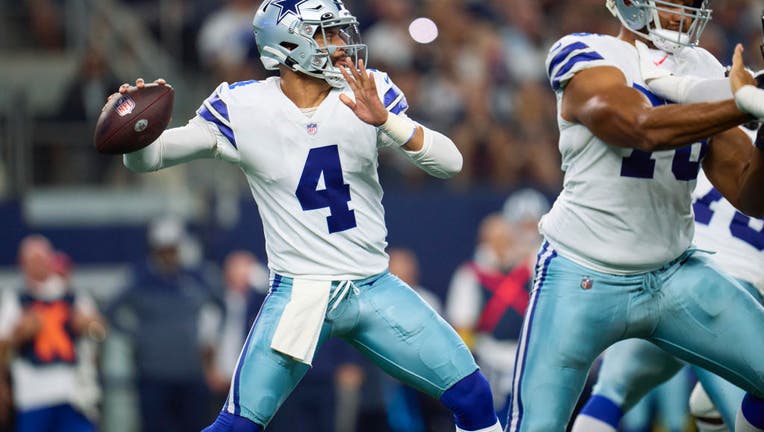 ARLINGTON, TX - SEPTEMBER 11: Dak Prescott #4 of the Dallas Cowboys drops back to pass against the Tampa Bay Buccaneers at AT&amp;T Stadium on September 11, 2022 in Arlington, TX. (Photo by Cooper Neill/Getty Images)

DALLAS - The Dallas Cowboys will not put Dak Prescott on the injured reserve, opening the door to the injured quarterback returning to the field sooner than expected.

"We want him to be in consideration for playing within the next four games," Owner Jerry Jones said on Audacy's 105.3 The Fan Tuesday morning. "We feel better about it than we did Sunday night."

Prescott fractured his thumb during Sunday night's loss to the Tampa Bay Buccaneers. Initial estimates said Prescott would likely miss 6 to 8 weeks with the injury.

Putting Prescott on the IR would automatically rule him out for at least 4 weeks.

"If we thought he wasn't going to be ready to go for four games we would put him on IR.," Jones told Shan and RJ. "We think he can come in and play, so we don't want to not have him out there practicing. We want him getting prepared, and we'll see how he can handle this thing. How he heals."

Jones also said the team is not working on a potential trade for a new quarterback. Jones said the team will instead stick with backups Cooper Rush and Will Grier.

"It is unlikely you would have a veteran quarterback that could get back in here and be ready to play as well as those guys can play, even if you thought you might have a talent advantage," Jones said.

Rush is expected to start Sunday against the defending AFC Champion Cincinnati Bengals.