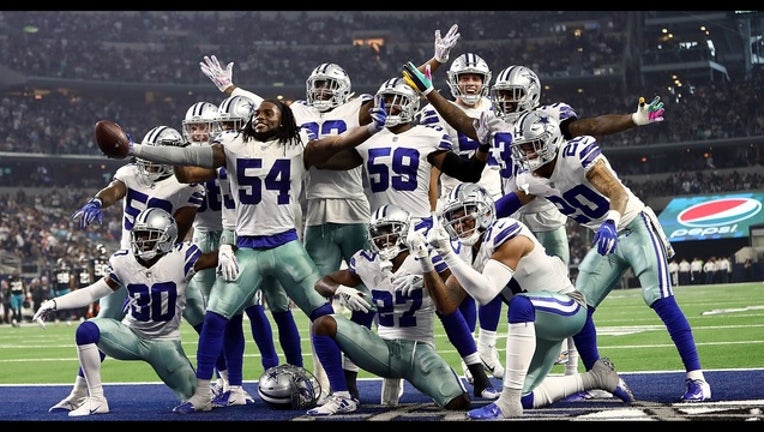 ARLINGTON, Texas (AP) - Ezekiel Elliott had a quiet 100-yard game by his standards in the Dallas Cowboys' rout of the Jacksonville Jaguars.

The star running back spoke the loudest after the 40-7 win on the home-road discrepancy for a .500 team that's perfect at AT&T Stadium and winless with three mostly anemic offensive showings on the road.

Up next before Dallas' open week: a trip to NFC East-leading Washington (3-2), a half-game ahead of the Cowboys and defending Super Bowl champion Philadelphia, tied at 3-3.

"Obviously it's something we can do, but we need to do it," Elliott, emphasizing "need," said Sunday after rushing for 106 yards and a touchdown. "If we keep not winning on the road, we're not going to make the playoffs."

Dallas has three touchdowns on the road - one in each game. The Cowboys are averaging nearly 100 yards per game more at home than on the road, and the numbers are particularly stark in the first half.

At home, the Cowboys have a 210-125 edge in yardage before halftime compared to a 221-103 deficit at the break on the road. It's not exactly the formula for taking a crowd out of the game.

"We've been a good road team in the past," coach Jason Garrett said. "We have a young team. We have to understand how to handle the conditions on the road."

After some pregame pumping up for Dallas from UFC star Conor McGregor , Cole Beasley had his first two touchdown catches of the season against the Jaguars.

Dak Prescott threw for 151 of his 183 yards before halftime and had 82 yards rushing, the second-best total for a quarterback in franchise history behind Roger Staubach's 90 yards in 1971.

Prescott had two other career numbers: his longest run, a 28-yarder after escaping a sack, and his longest scoring run - from 17 yards after a fake to Elliott for Dallas' first TD.

The 2016 NFL Offensive Rookie of the Year didn't have to throw in the second half, so the team's 30th-ranked passing game coming in couldn't really be judged by another sub-200-yard game.

"I was talking to Dak the other day and we talked about how this game could set us up for the rest of the season," said receiver Allen Hurns, who didn't have a catch despite five targets. "We've still got to focus on trying to win on the road."

Things to consider after the Jaguars (3-3) had season lows in total offense (204 yards) and yards rushing (65) while running just 47 plays to 72 for the Cowboys:

Leonard Fournette's availability with a balky hamstring will remain one of the big topics for Jacksonville, which is on its third left tackle in Josh Walker while All-Pro left guard Andrew Norwell has been a disappointment as a big-money free agent.

The Jaguars want to run - they're 0-3 when they don't get to 20 carries. Four-time All-Pro Jamaal Charles, unsigned before joining the Jaguars this past week, got a taste with five carries for 5 yards and a 5-yard catch. His role going forward will be something to watch. Starter T.J. Yeldon had 41 yards on just eight carries.

"We're pretty banged up, but we've got guys that can play at any position," said quarterback Blake Bortles, who was 15 of 26 for 149 yards after establishing career highs in yards passing the previous two weeks. "We expect a lot out of everybody out there."

The defensive front of the Cowboys is getting close to full strength, and could need the help with top pass rusher DeMarcus Lawrence trying to play through a shoulder injury.

Defensive tackle David Irving made his season debut after serving a four-game suspension and missing his first possible game for personal reasons. He had an early pressure on Bortles.

End Randy Gregory had his first sack since returning from substance-abuse suspensions that sidelined him for 30 of 32 games over two seasons. Gregory had a team-high three QB hits. Tackle Maliek Collins returned after missing three games with a knee injury and had his second sack of the season.

"With that particular lineup, it's an unbelievable rush group," owner Jerry Jones said.

Jacksonville is in a three-way tie for first in the AFC South with one of those teams, Houston, visiting Sunday. A good place for the Jaguars to start would be to start faster. They were outscored a combined 44-0 in the first half of losses to Kansas City and Dallas. The Cowboys scored on all four first-half possessions against the NFL's No. 1 defense. "I'm going to figure it out, but it's my job to make sure that our team comes out and they're ready to play," coach Doug Marrone said.