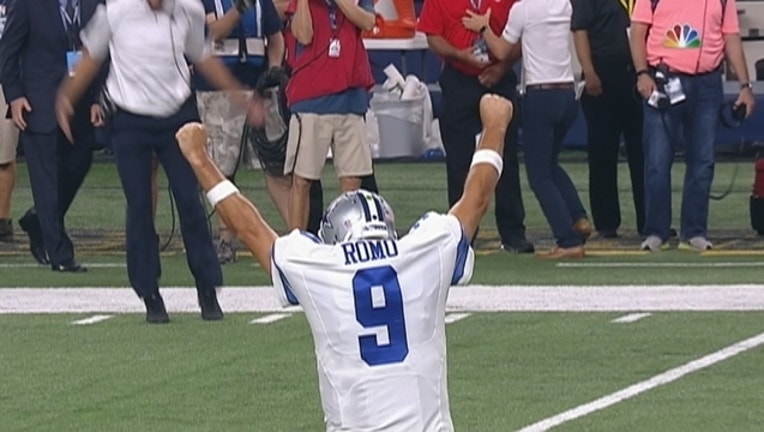 ARLINGTON, Texas (AP) — Before Tony Romo could survey the field for a potential winning touchdown pass in the final seconds of the opener against the New York Giants, he had to reach to the turf and grab the loose ball from a low snap.

When the Dallas quarterback looked up, he saw someone familiar waiting for a throw at the goal line: trusty tight end Jason Witten.

Romo threw an 11-yard touchdown pass to Witten with 7 seconds left, and the Cowboys overcame three turnovers that led to easy New York points to beat the Giants 27-26 on Sunday night.

"Jason's obviously a special player. He's obviously close to me," Romo said after his franchise-record 24th fourth-quarter comeback. "It's a great feeling to see him score that winning touchdown. He's the best."

Romo, who threw for 356 yards and three touchdowns with two interceptions, will have to live without his other most important target for at least a month.

All-Pro receiver Dez Bryant, who wasn't on the field for both fourth-quarter touchdown drives by Dallas, is expected to miss four to six weeks after breaking his right foot in the second half.

"You can't replace Dez Bryant," Romo said. "I hurt for him right now."

The Cowboys drove 72 yards in 1:27 after stopping New York at the 1 and forcing Josh Brown's fourth field goal when a touchdown would have sealed the Giants' first victory in an opener against Dallas.

The defending NFC East champion Cowboys are 8-0 against their division rival in openers, and have beaten them five straight times.

Dominique Rodgers-Cromartie returned a fumble 57 yards for a touchdown, and the Giants had to go just a yard for their other TD after Trumaine McBride's interception.

The Giants tried to throw on third down from the Dallas 1 with a 23-20 lead, but the Cowboys didn't take the play-action fake. Eli Manning threw the ball away instead of taking a sack, stopping the clock and giving Romo the final 1:34 to try to win.

"It was bad clock management," said Manning, who had 193 yards passing with no touchdowns after throwing 12 TDs in the previous four games against Dallas. "It was definitely an option to take a sack and run 40 seconds off the clock and give them less time. That's 100 percent on me."

But Giants coach Tom Coughlin took the blame as well.

"The decision to throw the ball on third down was not a good decision," he said. "It should have been a run, whether we scored or not."

On the winning play, Romo picked up ball after a low snap and found Witten — who finished with eight catches for 60 yards and two TDs — shielding defenders at the goal line. The 13-year veteran made the catch, stayed on his feet and left no doubt about getting the ball in the end zone for yet another huge connection between one of the most prolific quarterback-tight end combos in NFL history.

"With what I've experienced here, he's always great in 2-minute, especially him and Witten," Giants cornerback Prince Amukamura said. "You can tell he's very poised and you definitely don't want the ball in his hands in the final two minutes. But whenever that's the case, the defense has to step up."

Romo led two quick touchdown drives in the fourth quarter after McBride's interception set up Rashad Jennings' 1-yard scoring that put the Giants up 23-13 with 8 minutes to go.

"He has great poise. He has great understanding about what he wants to do," Dallas coach Jason Garrett said. "Tremendous amount of confidence in that huddle, and a lot of it comes from the confidence the quarterback projects to the team."

Running back Lance Dunbar got the final Dallas drive going with two catches for 40 yards. He finished with team highs of eight catches for 70 yards with Bryant twice leaving the game. The first time was in the first half because of dehydration.

The Giants converted two Dallas turnovers into 10 points in the final minute of the second quarter.

Rodgers-Cromartie picked up a fumble by receiver Cole Beasley just before he hit the ground at the end of a run and ran 57 yards untouched for a 10-6 lead.

On Dallas' next snap, Romo threw behind Witten, who tipped the ball into the arms of linebacker Uani Unga, starting because Jon Beason missed the game with a sprained left knee. The Giants had to settle for Brown's second field goal, from 40 yards.

Joseph Randle got most of the work in the first game for Dallas without 2014 NFL rushing leader DeMarco Murray. He had 16 carries for 65 yards, and Darren McFadden had six for 16.