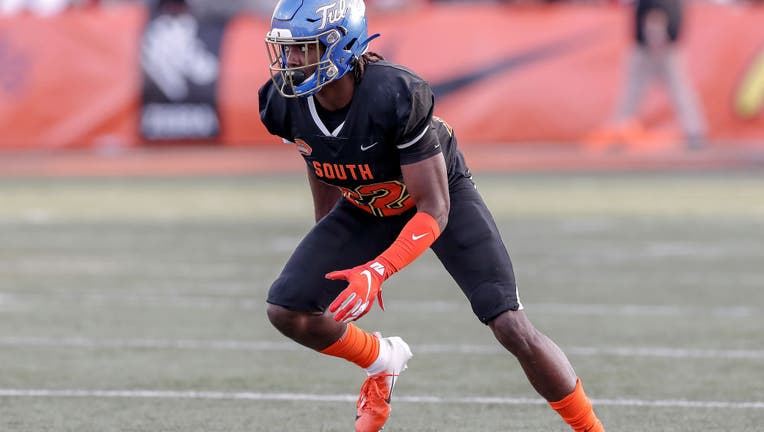 MOBILE, AL - JANUARY 25: Cornerback Reggie Robinson II #22 from Tulsa of the South Team during the 2020 Resse's Senior Bowl at Ladd-Peebles Stadium on January 25, 2020 in Mobile, Alabama. The North Team defeated the South Team 34 to 17. (Photo by Don

The Dallas Cowboys added more defensive help on the third day of the NFL draft, but also took a quarterback and a possible replacement for center Travis Frederick, who recently announced his retirement.

The Cowboys selected four players on Saturday, starting in the 4th round, pick 123 overall, taking cornerback Reggie Robinson II out of Tulsa.

Then they traded up for the final pick of the 4th round, selecting Wisconsin center Tyler Biadasz.

Just over a month ago, Cowboys All Pro center Travis Frederick retired, leaving Dallas with a need at that position.

And they filled it with a player from Frederick’s alma mater, Biadasz.

The Cowboys traded a 5th round pick this year and a 5th rounder next year to the Eagles to move up to the final pick in the 4th round, to select Biadasz.

His resume pops off the page. He was the 2019 Rimington Trophy winner, as the nation’s top center, and a consensus first-team All-American.

A 2019 consensus All-American, Anae left Utah as the all-time leader in sacks, with 30, including 13 this past season, good for 8th best in the FBS.

And in the 7th round, the Cowboys went with James Madison quarterback Ben Dinucci.