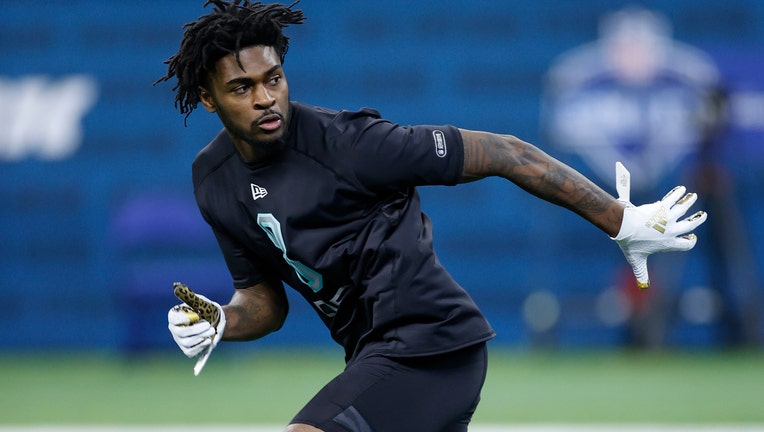 INDIANAPOLIS, IN - MARCH 01: Defensive back Trevon Diggs of Alabama runs a drill during the NFL Combine at Lucas Oil Stadium on February 29, 2020 in Indianapolis, Indiana. (Photo by Joe Robbins/Getty Images)

DALLAS - The Dallas Cowboys turned the focus to their bigger needs on defense on the second day of the NFL draft Friday night, taking Alabama cornerback Trevon Diggs and defensive tackle Neville Gallimore of Oklahoma.

The Cowboys had pivoted away from defense in the first round when Gallimore's teammate, receiver CeeDee Lamb, was unexpectedly available with the 17th overall pick. They turned their attention back to defense in the second and third rounds.

Diggs, the younger brother of Buffalo receiver Stefon Diggs, was the 51st overall choice. Gallimore was the 82nd overall pick.

Dallas lost its best cornerback in Byron Jones, who signed with Miami in free agency. Diggs had three interceptions and tied for Alabama's team lead with eight pass breakups.

The younger Diggs went 95 picks earlier than his brother five years ago. Stefon Diggs was drafted by Minnesota in the fifth round but ended up getting traded to the Bills for several picks, including a first-rounder this year.

"I relied on him a lot because he went through everything," Trevon Diggs said. "He's my father figure, so it's a blessing to have him, to ask him questions. I'm going to share this moment with him."

The Cowboys tied for last in the NFL in interceptions last year and have been among the worst in the league in that category the past five seasons. They have young cornerbacks they like in Chidobe Awuzie, Anthony Brown and Jourdan Lewis, but the position was still one of need.

The 6-foot-2, 304-pound Gallimore had four sacks and 7 1/2 tackles for loss for the Sooners, who lost to LSU in the College Football Playoff semifinals last season. The Cowboys now have two natives of Canada on their defensive line. Tyrone Crawford was a third-round pick eight years ago.

Diggs will have a good chance to start, most likely alongside Awuzie, a second-round pick three years ago. Brown and Lewis have shown promise, and the Cowboys signed four-year veteran Maurice Canady in free agency. Among those players, Brown is the oldest at 26.

The Cowboys also hope to boost a pass rush led by DeMarcus Lawrence with the reinstatement of suspended defensive ends Aldon Smith and Randy Gregory. Both are sidelined by violations of the NFL's substance-abuse policy.

Smith, who hasn't played since 2015, signed a one-year deal. Gregory was a second-round pick in 2015 and has been suspended four times, the most recent one forcing him to miss all of last season.

The Cowboys hired an offensive mind in Mike McCarthy to replace Jason Garrett, whose contract wasn't renewed after a season of high expectations ended with an 8-8 record and no trip to the playoffs.

The Cowboys also have two perennial Pro Bowlers in the offensive line in left tackle Tyron Smith and right guard Zack Martin, so the question now is now a retooled defense can complement what is shaping up to be a high-powered offense.