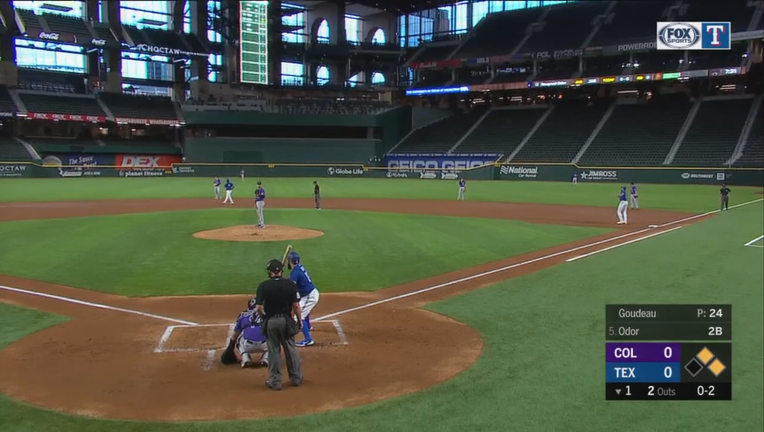 There were no fans in the stands as the Texas Rangers played their first game in the new Globe Life Field. Some players also wore face masks.

ARLINGTON, Texas - The Rangers finally played their first game at their new home Tuesday night. The team hosted the Colorado Rockies in an exhibition game at Globe Life Field.

According to the Associated Press, Nolan Aranado and David Dahl hit two-run homers, and Daniel Murphy hit a solo shot, all in five innings off Rangers starter Kyle Gibson. The Rockies won 5-1.

There were no fans in the stands and several players wore face coverings.

There was still plenty of excitement about the new retractable roof ballpark. The Rangers manager said its artificial turf has some unique characteristics.

"This infield places a huge priority on being in the right spot because the ball kind of gets through especially those low hard ground balls. They don't really slow down and the ball kind of skips off the turf a little bit at times. You have to be there at the right spot or you have to be quick and agile to get to the ball. So it's going to be a huge emphasis for us this year. If we can defend on the ground we're not going to give up too many runs. It's a huge priority for us," said Chris Woodward, the Rangers manager.

The Rangers have one more exhibition game against Colorado Wednesday night at 7:05.