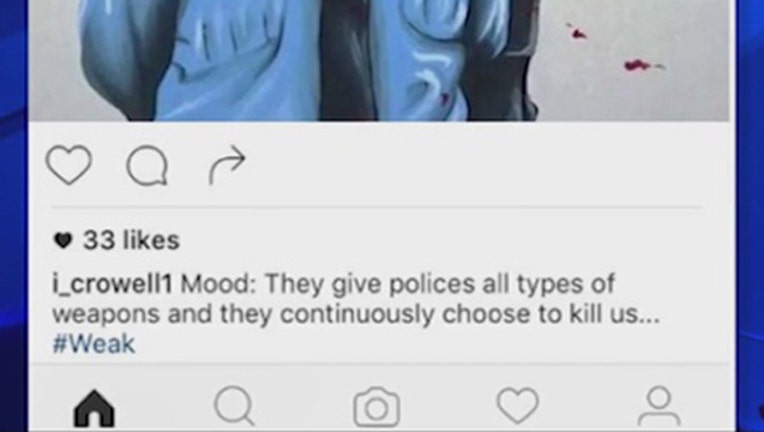 BEREA, Ohio (AP) — Cleveland Browns running back Isaiah Crowell said Wednesday he will donate about $35,000 to a fallen officers fund in Dallas as part of his apology for posting a drawing on Instagram last week showing a police officer getting his throat slashed.

Crowell, in a video posted on Facebook, apologized again for the post and said he would donate his first game check to a fund for the police officers slain and injured during a sniper attack last week. He didn't say what the exact amount would be, but his yearly salary is $600,000 covering 17 weeks of the NFL season, including a bye.

"I know this might not change your mind about me, and I know I can't take the post back, but I'm sorry and moving forward I'm committed to being part of the solution," the 23-year-old Crowell said in the video.

Crowell posted the drawing after black men in Louisiana and Minnesota were fatally shot by police. He subsequently deleted the post, but a screenshot continued to be circulated on social media.

Crowell said he was "frustrated and upset" and let his emotions get the better of him. He said he knew the post was wrong almost immediately and deleted it with no prompting.

"I would never wish violence on anyone, especially a police officer," he said.

Still, the post upset Cleveland police officers who are preparing for the Republican National Convention starting next week in the city. Steve Loomis, the president of the Cleveland police union, had threatened to pull police staffing of Browns games because of it, but he said Wednesday he was satisfied with Crowell's apology and donation.

Five police officers were killed in the Dallas attack last Thursday night at a protest over the shooting deaths of the two black men by white officers. Seven other officers and two civilians were wounded.

The Browns were clear about their displeasure with Crowell's post, calling it an "extremely disturbing and unacceptable social media decision" in a statement released earlier this week. The team called on Crowell to "take steps to make a positive difference after a very negative and impactful post."