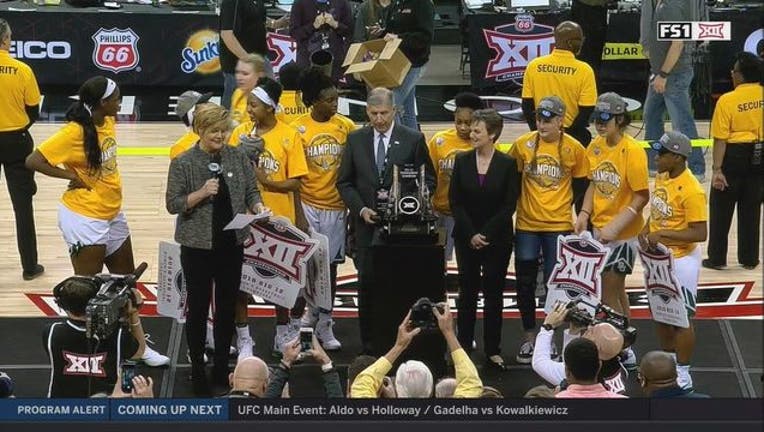 Brown, a 6-foot-7 center, was named the tournament's Most Outstanding Player after averaging 24.7 points in three games.

Baylor led 35-33 at halftime. Baylor got 10 points from Brown and nine rebounds from Cohen before the break. Texas countered with 14 points from Higgs.

Brown drove for a layup in the closing seconds of the third quarter and Texas' Jordan Hosey fouled her hard. Brown was helped off the court. No flagrant was called, and Brown returned after the review. Baylor led 52-46 at the end of the third quarter.

Juicy Landrum's 3-pointer to start the fourth quarter pushed Baylor's lead to nine, and it looked like the Lady Bears might be off and running to another one of their blowouts. Instead, Texas responded with a 9-0 run. Joyner Holmes' layup with about seven minutes to play tied the score at 55, and McCarty's 3-pointer with just over five minutes to play finally gave Texas the lead at 58-57.

With Baylor leading 65-64 with 1:41 remaining, Cox was fouled by Holmes on a rebound and Cox swung her arm angrily after the contact. Aston thought there should have been a call against Cox, and her argument drew her first technical foul of the season. Cox made four free throws to make it a five-point game.

Texas: The Longhorns are in good shape for the NCAA Tournament. Their guards played well, and their depth should serve them well.

Baylor: The Lady Bears lack depth, but their talent was enough. Morris showed she could lead the team though three games that meant something.

Both teams will play in the NCAA Tournament.