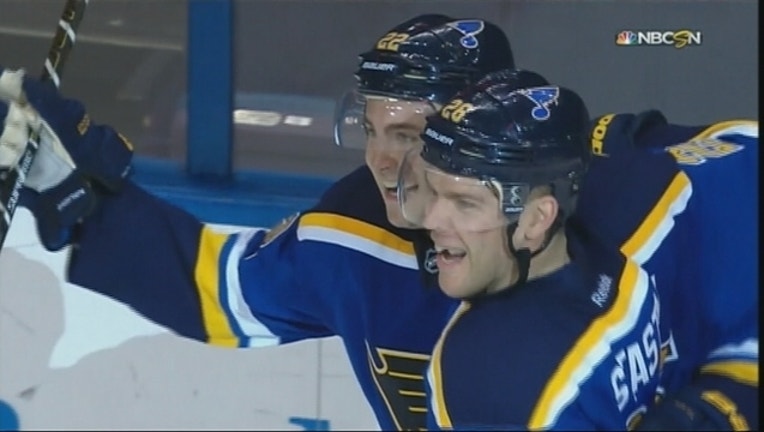 The 30-year-old forward showed plenty of poise when his first shot clanked off the post midway through the third period. The second effort off the backhand produced the goal that put a long-frustrated franchise over the top against the defending Stanley Cup champions.

"I just tried to stay with it, knowing the magnitude of the game, knowing how everything's been going," Brouwer added.

Brouwer played for the Blackhawks' Cup winner in 2010 and this was his seventh career Game 7. The goal at 8:31 was his first in 24 postseason games since 2013 and was the difference in a tense series that was either tied or a one-goal game 91 percent of the time, according to NHL.com.

Chicago just missed a chance to tie it when Brent Seabrook's shot went off both posts with about 3:30 left. Coach Joel Quenneville came close to challenging the play.

"We had a sniff there," Quenneville said. "We didn't get the positive feedback from the headset. It was close."

It is the first time the Blues advanced past the first round since 2012, when they beat San Jose in five games but then lost four straight to Los Angeles. St. Louis plays Dallas in the next round.

"We're still not where we want to be," Brouwer said. "We want to be playing in a month and a half still."

Jori Lehtera scored his first career playoff goal and rookie defenseman Colton Parayko also scored for the Blues, who avoided another inglorious finish. They led 2-0 early, their second two-goal cushion in two games, before the Blackhawks tied it in the second period.

Marian Hossa scored his third goal of the series and Andrew Shaw got his fourth on a power play for the Blackhawks. Patrick Kane was dangerous all night but was scoreless, and was minus-3.

"It just doesn't really feel right," Kane said. "Pretty quick right after to put everything right after into words. Obviously, not the outcome we were looking for."

The Blackhawks have won three of the last five Cups — but when they don't win it all, the postseason can be a short one, with three first-round eliminations the last six seasons.

"You get the feeling that it'll be one of those things again and we feel from the get-go we've got the team to do it again," Chicago captain Jonathan Toews said. "Not much you can say right now. It was close the whole way."

Brouwer scored from close range off a feed from Robby Fabbri. The first shot went off the right post and he nudged the second past Corey Crawford.

St. Louis was coached by Quenneville the last time it played in a Game 7, a loss at Vancouver in 2003. The Game 7 win was the franchise's first since 1999.

"To coach it, to play in it, to strategize in it, it was a lot of fun," Blues coach Ken Hitchcock said. "I don't know if it's a milestone. It's a hump."

The Blues outscored the Blackhawks 7-3 in the first period in the series, but Chicago owned the second period with an 11-3 advantage. That included the first three of five unanswered goals in Game 6 on Saturday.

Blues standout Vladimir Tarasenko was no factor after entering among the playoff leaders with four goals. He went to the locker room for about 2 1/2 minutes midway through the second for undisclosed reasons and his ice time was down at 14 minutes and 31 seconds — second-fewest on the Blues' top three lines — just as it has been earlier in the series.

Game 7 drew a standing-room attendance of 19,935 and the arena had seldom been louder than after Parayko's drive from the point made it 2-0 at 13:43 of the first period. Lehtera's deflection on Jay Bouwmeester's point shot gave St. Louis an early cushion just a minute in.

The Blackhawks had a 7-0 shots advantage the rest of the period and Hossa's third of the series, a drive from the top of the right circle on the counter-attack, cut the deficit to one at 18:30.

Chicago made it 14 shots in a row at the start of the second period, including the tying goal by Shaw from a bad angle off the leg of Bouwmeester crouching in the crease and past Brian Elliott.