FORT WORTH, TX - Graham Palmer is many things.

And completely blind since birth.

"I kind of see it as a learning opportunity," said Graham. "A lot of people think blind people can’t do this they can’t do that and then they find themselves wrong."

"He just does life and you just do life with him," said DeAnn Palmer, Graham’s mother. "You just see life through his life and the way that he sees life is kind of amazing."

Graham was born with an extremely rare condition called Norrie’s disease. At the time, DeAnn Palmer was told only about 100 cases had been diagnosed worldwide.

"We found out when he was about three weeks old that he was blind," said DeAnn. "It was a shock. It wasn’t’ something I think any parent’s every prepared for."

In addition to blindness, the disease has started to cause Graham to lose his hearing.

"Whenever he lost his hearing in the first ear, he kind of got over that," said DeAnn. "Losing it in the second was harder."

"I just block the bad thoughts out," said Graham. "This hearing loss is extremely mild."

"Now he’s taking ASL here at Brewer (high school)," said DeAnn. "So he’s learning sign language and taking the appropriate steps that he’s going to have to do."

That ‘do whatever it takes’ mentality is something Graham says he found playing sports.

"It came from the journey to me getting in athletics," said Graham. "It all started in fourth grade at Special Olympics."

Since then, no challenge has been too big. For four years, Graham left home for Austin to go to the Texas School for the Blind and Visually Impaired.

"It was basically like sending my 12 year old to college," said DeAnn.

This year, Graham decided he was ready to move home and attend Brewer high school. He figured out how to navigate life as a blind student, then made up his mind to become a Brewer Bear in more ways than one.

A self-taught musician, Graham joined the band, bringing a dedication that’s made an impact on his new band family.

"It rubs off on everybody," said Andrew Williams, who directs the Brewer band. "They see that and are like, ‘Wow, this is amazing.’ It’s just, whatever he wants to do he goes after it and that’s what he’s been able to do."

Now graham’s on a mission to join the track team, something he laid the groundwork for this spring by asking head coach David Porter to be his guide runner so he could show off his skills in the 800.

"He definitely wants to inspire the kids around him," said Porter. "So as he was doing it he was like, ‘Yeah, I want to show the other kids how it should be done."

One of graham’s favorite places at brewer to prove what he can do has been the wrestling mat.

"That if he joined my team that he was going to be a state champion," said Feexico. "So, I was like, OK." 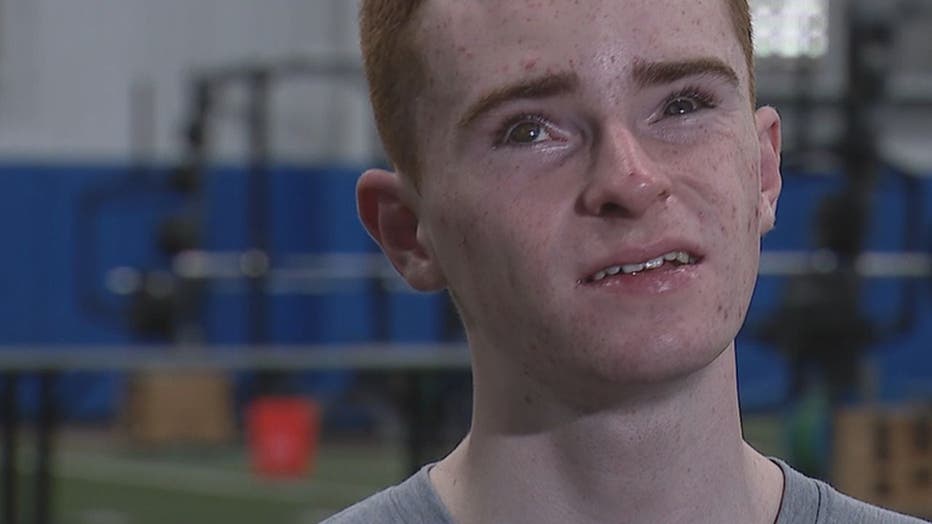 It was a first for Feexico – coaching a blind wrestler against opponents who could see – but there was only one new rule to follow.

"The other wrestler has to maintain contact with the blind wrestle," said Feexico. "And it’s not like an advantage. He still has to wrestle just like everybody else."

"I don’t think I could do it," said Segrest.

Segrest helps Graham navigate his way around before, during and after their wrestling workouts.

"He’s a really good friend," said Segrest. "It’s crazy we’ll be sitting here, everyone will be quiet and he’ll just be like "We’re all brothers, we wrestle together, we’re a big family – that’s what he says."

Graham’s still working to deliver on that state championship promise, but he did give his family in the stands – and his Brewer family – a moment he could see coming all along.

A pin, in his final match of the season.

"It’s just one of those things that – it just makes you feel good," said Feexico.

"You want to cry and scream and yell and all those things," said DeAnn. "A lot of pride. That was a good moment."

Instead of focusing on what he doesn’t have, what’s hard to do and what he could lose, Graham Palmer chooses to see what could be.

A chance to make a big impression on people, wherever he goes.

And what he’s found at Brewer high school has been a family even he couldn’t picture before.

"I never felt this great, to be honest," said Graham. "It feels awesome."