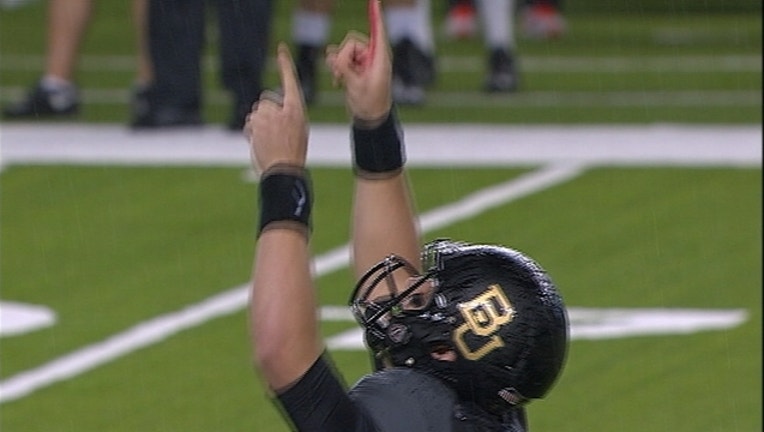 Baylor often makes reference to itself as #WRU — or Wide Receiver U.

While generally an apt description for the fifth-ranked Bears with their big-play receivers, that doesn't tell the full story for Baylor — or the Big 12 Conference.

Big 12 teams certainly know how to throw the ball down the field, with four of the nation's top eight passing offenses. But they can also run.

Baylor, fourth-ranked TCU, No. 23 West Virginia and Texas Tech all have at least one running back averaging 100 yards per game to go with a receiver gaining more than 100 yards a game.

That is four Big 12 teams with such 100-100 duos. Indiana, with the Big Ten's top receiver and rusher, is the only other team in a Power Five conference with a double threat like that. Notre Dame has a dynamic duo, too.

"If you watch the whole game film and look at the whole numbers, it's not like it's 80-20 pass, it's more around 55-45, 60-40 pass to run," Texas Tech coach Kliff Kingsbury said. "Teams in this league do a good job mixing it up, and the run really does set up a lot of the big plays."

BAYLOR: While the Bears have become well-known under coach Art Briles for their receivers, including Corey Coleman (Big 12-best 153.3 yards per game, FBS-best eight touchdowns), they also have the nation's top rushing offense with 379.7 yards per game. They are the most balanced team in the league, splitting their nation's best 767 total yards a game almost evenly through the air and on the ground. Shock Linwood's 121 yards rushing per game top the Big 12, while Terence Williams gains 101.7 yards per game. Surprisingly, Baylor throws on only 39 percent of its plays — only Texas and Kansas State pass less — but has a three-TD receiver in every game so far.

WEST VIRGINIA: Mountaineers coach Dana Holgorsen strives for being as balanced as possible. "That's not the yardage output or any of the amount of plays that we throw it, or amount of plays we run, it's more about having the ability to be able to take what the defense is giving you," he said. "We feel like we're in the position we can do both." And they are with receiver Shelton Gibson (109.7 yards receiving a game) and running back Wendell Smallwood (110.3 rushing yards per game), not to mention a quarterback in junior Skylar Howard that Holgorsen said "can run around a little bit."

TCU: Horned Frogs coach Gary Patterson has often talked about receiver Josh Doctson and running back Aaron Green playing themselves into shape after being slowed by some nagging issues. Well, they are quite a productive pair. Doctson's numbers have improved each week, and he matched a Big 12 record that had stood since the league's inaugural 1996 season with 18 catches (for 267 yards and three touchdowns) against Texas Tech. He averages 148.3 yards receiving per game. Green is running for 109 yards a game, with three consecutive two-TD games, but also had TCU's biggest catch so far this season — that highlight-stealing grab in the back in the end zone of a pass that deflected off Doctson's hands in the final minute of the 55-52 win over the Red Raiders last week.

TEXAS TECH: As a player, Kingsbury was in a long line of Texas Tech quarterbacks who could sling the ball with the best. The Kingsbury-coached Red Raiders still throw the ball 58 percent of the time — more than any other Big 12 team — but have tailback DeAndre Washington (118.8 yards rushing per game) to go with Jakeem Grant (103.2 yards receiving per game) and two of the league's other top-10 players in receiving yards. Texas Tech gets about two-thirds of its yards through the air, as do Oklahoma, Oklahoma State and Iowa State.