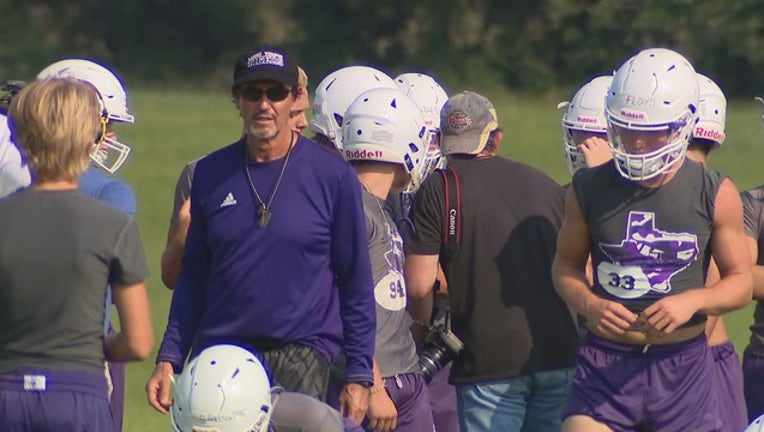 He is some 200 miles and seemingly a lifetime away from Baylor, the school he led to the doorstep of the College Football Playoff five years ago and the school that fired him three years ago in the wake of a sprawling sexual assault scandal he has insisted he handled correctly. After going to Europe when job opportunities in the Canadian Football League and a Mississippi college dried up, Briles is back - sort of.

He will be under the Friday night lights in Mount Vernon, population 2,750, and on humble fields in a handful of otherwise quiet, Class 3A towns into early November.

Most residents knew nothing about the possibility of Briles becoming coach until the school board unanimously approved his hiring in a special meeting on the Friday night going into Memorial Day weekend. That was only a couple of hours before the high school graduation ceremony at Don Meredith Stadium, named after the former Dallas Cowboys quarterback and "Monday Night Football" announcer who is easily the town's most famous native son.

A few weeks after Briles got a two-year contract for $82,000 a year, about 60 people filled the room for a school board meeting. Only three of them addressed superintendent Jason McCullough and the board members about hiring Briles and only Lauren Lewis spoke against it.

Lewis, who returned to her hometown with her husband about three years ago after living for a decade in Austin, said people later thanked her for speaking out.

"This is a kind, loving, welcoming place, and I think that they tried to put that spin on it, this is a redemption story, we're going to be able to help this guy," Lewis said. "But there's no redemption without remorse."

Briles was fired in May 2016 after an investigation by a law firm found that over several years the school mishandled numerous sexual assault allegations, including some against football players. The Pepper Hamilton investigation also led to the departures of university president Kenneth Starr, who was demoted and later resigned, and the resignation of athletic director Ian McCaw, now the AD at Liberty University in Virginia.

The investigation led to 105 recommendations for the school to reform its Title IX process and the world's largest Baptist university is still waiting for the outcome of an NCAA investigation into the case.

It was a humiliating ending for Briles, a legend in Texas coaching. He was a high school coach for 21 seasons, among those credited with introducing versions of the spread offense to Texas high school ball, before becoming a Texas Tech assistant in 2000, and later the head coach at Houston and Baylor. He won four state championships in a seven-year span at Class 4A Stephenville.

Briles, who received $15 million from Baylor to settle his contract, got a "lot of no's" when trying to get back into coaching before his first real opportunity, a semipro team in Italy with players ranging in age from 16 to 43, many who openly smoked and drank after late-night practices.

And then Mount Vernon's previous coach left in May for his alma mater. Briles, still in Italy, was initially contacted by a woman living in Mount Vernon who had worked with him in Baylor's football office. Briles is now in a "Texas Treasure" town just off Interstate 30 about 100 miles east of Dallas.

"I think we're lucky to have him and I'm going to support him 100 percent," said Tom Ramsay, the 79-year-old, cowboy hat-wearing former state representative whose real estate office is on the town square.

"He's took some licks," Ramsay said. "Think about what he's been through. Let's just say 99 percent chance that he's innocent, has he paid a price for that one percent? Yeah, sure has. I think it's good to be able to be in a position to give him, not necessarily another chance, but give him another swing. It might not be the last chance."

When Mount Vernon opened practice in August, Briles said he would be content if this was his "last dance" in coaching. Still, he seemed to perk up and sounded enthusiastic when asked if he would like to coach in college again. He has not spoken in depth with any reporters since he arrived in July.

McCullough, a former coach and teacher in the district who returned as superintendent a year ago, said the response he has gotten locally has been genuine excitement about the upcoming season.

"What my hope and desire is, that he's going to come here and fall in love with this place, and the kids and our community, and that he would want to stay long term," McCullough said. "But I also know that, no different than you or I, we don't know what's going to happen tomorrow. ...

"I'll take him for the time that we've got him," he said. "He'll invest in our kids and our community, and we're going to be excited about it."