For the first time, the AT&T Byron Nelson golf tournament will tee off in Collin County.

McKINNEY, Texas (AP) - Jordan Spieth had his longest stretch all day of mere pars — a whopping four holes — on the besieged new home course of the AT&T Byron Nelson when the local favorite stepped over a 55-foot eagle putt on the par-5 18th.

Nothing but the bottom of the cup, and a share of the first-round lead with J.J. Spaun at 9-under 63 on a nearly wind-less Thursday.

Spieth, Spaun and plenty of others had little trouble with TPC Craig Ranch north of Dallas. There were 132 players in the field of 156 under par, with 94 of those in the 60s on the third venue in the past four Nelsons.

"It’s a good golf course, but it’s playing about as easy as it can play," said 2018 Nelson winner Aaron Wise, who was among four one shot off the lead. "We got a ton of rain the last two days and then perfect weather today and looks like tomorrow and Saturday as well, so it’s set up for scoring."

Hideki Matsuyama sputtered on the front nine in his first appearance since becoming the first Japanese player to win the Masters, then stalled again after three straight birdies to start the back nine. He finished at 68.

Sung Kang, the defending champion as the 2019 winner, shot a 67 on his home course. The South Korean player put his 234-yard approach on the par-5 ninth to 8 feet and made the eagle putt. He had four birdies and a bogey.

After last year’s COVID-19 cancellation, the Nelson returned to the suburbs at McKinney’s Craig Ranch after two years at Trinity Forest, a treeless links course in Dallas. The Four Seasons resort in Irving was home for more than 30 years. 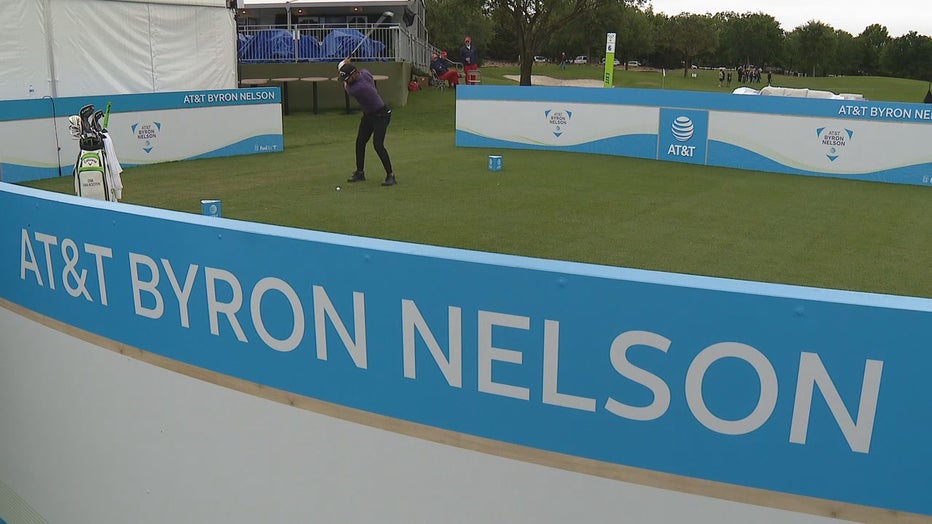 Craig Ranch was the site of two Korn Ferry Tour Championships, but was little match for its first test at the higher level. Soft greens from recent rain and the calm conditions made for favorable scoring right from the start.

Rafa Cabrera Bello was the first to post 64, soon joined by Wise, still looking for his second career PGA Tour victory three years after his first at the Nelson, and Doc Redman. Joseph Bramlett joined them from the afternoon pairings.

Sergio Garcia, who holed out from 52 yards for eagle on the par-4 sixth, was in a large group at 65.

Jon Rahm, the highest-ranked player in the field at No. 3 after top-ranked Dustin Johnson withdrew because of a knee issue, birdied three of his first five holes but cooled off and finished at 68.

Like Matsuyama, Spieth was playing for the first time since the Masters, but because of a positive COVID-19 test instead of a trip home to Japan, where Matsuyama celebrated with the green jacket in his golf-loving country.

Spieth’s first bogey-free round out of 34 at the Nelson included a birdie on the par-5 12th when his 247-yard second shot from a bad lie in the rough rolled through the green to a hill on the fringe before coming back and settling 10 feet away.

Spieth missed that eagle putt, but not the next one. From the lower tier of the wide green on 18, he rolled the putt up the hill and in with the pin still in the cup, prompting a huge roar from a gallery following three Dallas-area players.

"I’m just trying to get to tap-in and cap off a good day, and I kind of started leaning because I thought it was going to miss left and it just kind of fell in the left side of the hole," said Spieth, who has never finished in the top 10 after contending on Sunday as a 16-year-old amateur in 2010. "The roar was pretty electric."

Brooks Koepka also was playing for the first time since the Masters, where he missed the cut less than a month after right knee surgery.

The four-time major winner says the knee is better, but it didn’t show in his return. Koepka had four birdies and three bogeys for a 71, at risk of missing the cut for the second time in six Nelson appearances.

Masters runner-up Will Zalatoris, who grew up not far from Craig Ranch and has played it frequently, had similar troubles. The 24-year-old shot 70 a week after missing the cut at the Wells Fargo Championship. But he did match Spieth’s eagle on 18 with a more routine 15-footer moments later.

Spaun missed the cut in nine of his first 15 events this season before a tie for 18th at Quail Hollow last week. All of the nine birdie putts Spaun made were inside 7 feet as he hit 11 of 14 fairways and 15 of 18 greens.

"It was a lot of searching," said Spaun, still looking for his first PGA Tour victory. "I feel like that’s something that us golfers kind of do too much of when things start to go wrong instead of just chalking it up to a bad week or couple weeks’ slump with the striking."