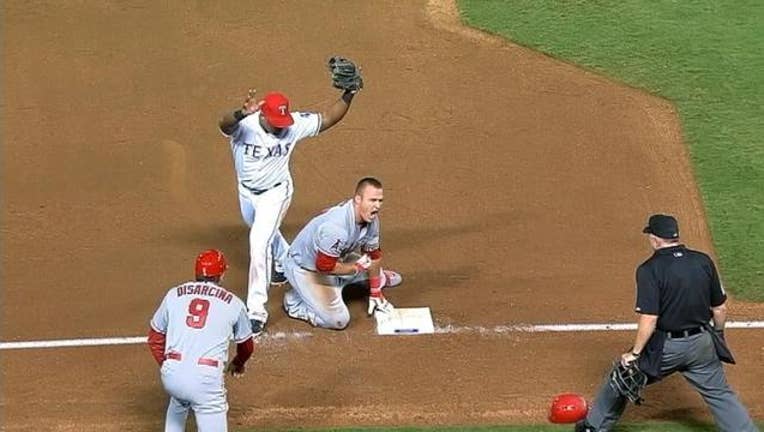 Rangers closer Shawn Tolleson (6-4) appeared in his fourth consecutive game. Trout hit the second pitch deep into the right-center gap, then slid headfirst into third base before emphatically pumping his right arm toward his teammates in the dugout.

Pujols followed with a soft single to left field on the next pitch.

Texas went into Friday already assured a playoff spot, but able to secure the division title with a win over the Angels or a loss by second-place Houston.

Already assured a playoff spot, Texas went into Friday needing a win over the Angels or a loss by second-place Houston to secure the division title. The Astros were playing in Arizona later Friday night, and were up 6-1 in the fourth inning when the Rangers finished their game.

Los Angeles began the day tied with Minnesota and a game behind Houston in the race for the second AL wild card. The Twins lost at home to AL Central champion Kansas City, dropping a game behind the Angels.

The Angels have won eight of their last 10 games, but their 5-3 loss Thursday in the opener of the four-game series assured Texas a playoff spot.

Mike Morin (4-2), the fourth Angels pitcher, retired the only batter he faced when Adrian Beltre grounded out to end the eighth.

Joe Smith worked a perfect ninth for his fourth save, including a strikeout of slugger Josh Hamilton, who was traded from Los Angeles back to Texas in April. Smith had faced only batter since a foot injury Sept. 17 before taking over in the ninth.

There was also a nice defensive play by Choo, who caught Trout's slicing fly to right while running into the right-field corner to start the sixth.

Erick Aybar singled on the first pitch of the game, advancing on Pujols' single before scoring on C.J. Cron's hit for a 1-0 lead off Rangers left-hander Martin Perez.

But Perez then retired 19 of the last 21 batters he faced, issuing a two-out walk to Trout in the third and allowing a two-out single to Aybar in the fifth. Perez's 100th and final pitch was a groundout by Carlos Perez to end the seventh.

Aybar, the Angels shortstop, had errors on consecutive plays in the sixth to allow Elvis Andrus and Rougned Odor to reach with one out. But Chris Jimenez struck out before a flyout by Delino DeShields ended the inning.

Angels: Manager Mike Scioscia said right-handed reliever Huston Street, a week after a groin injury, was starting to "activate his arm" this weekend but clearly wouldn't be available to pitch. As for the playoffs if the Angels make it, "We'll see how he feels in the next week," Scioscia said.

Rangers: DeShields said his left knee still gets tight at times, but other than that he is "close to 100 percent." He had a mild sprain in his knee Sept. 7 and missed three games. He's missed only one since, and is no longer wearing a brace.

Angels: Still in position for a playoff spot, left-hander Hector Santiago (9-9) takes the mound for the Angels. He is 3-0 with a 1.48 ERA in five starts this season against Texas.

Rangers: Right-hander Colby Lewis tries to increase his career high to 18 wins when he makes his 33rd start of the season. He has already thrown more than 200 innings. The only other times he did were 2010 and 2011, the seasons of the Rangers' only World Series appearances.