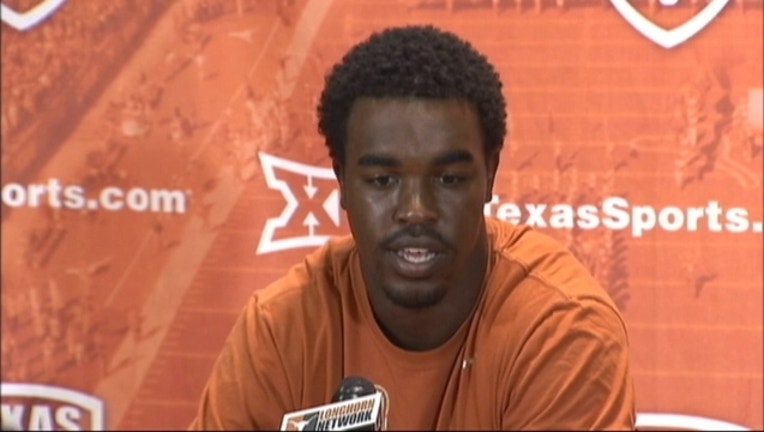 Speaking softly with a group of reporters the day he was announced as Texas' starting quarterback against No. 11 Notre Dame, Swoopes deflected a chance to puff out his chest and had to be goaded into reluctantly declaring — kind of — that the 2015 Longhorns are "his team."

"Everybody looks to the starting quarterback" to be the leader, Swoopes said. "But that wasn't my focus, which was to be the best I can be."

Swoopes talked about wanting to improve, staying within himself and making sure to "do my part."

He sounded a lot like the 2014 Swoopes, which is exactly what the Longhorns don't want on the field.

Thrust into the starting role before he was ready, Swoopes struggled all season in 2014. The worst came at the end in blowout losses to TCU and Arkansas.

That prompted coach Charlie Strong to open the starting job to competition with redshirt freshman Jerrod Heard. Strong also talked about changing the offense to a spread attack, which seemed to play right into the mobile Heard's strengths as a runner.

All signs pointed to Heard getting a shot to unseat Swoopes as the starter.

But by the end of spring, Swoopes still had the lead on the position. By summer, Strong was telegraphing that Swoopes was his No. 1 and made it official on Monday.

Swoopes was nonchalant about winning the biggest battle of training camp, even though it didn't appear to be much of a fight. He said he seldom thought about the daily competition.

"I wanted to get better and compete with myself. The coaches and everybody have seen the work I put in," Swoopes said.

The question is whether he made a great leap forward or if Heard failed to capitalize on an opportunity. And did Strong and offensive coordinators Shawn Watson and Joe Wickline really embrace the spread?

Swoopes made it sound like the Texas offense will look a lot like the ground-and-pound attack of last season when Texas went 6-7.

The Longhorns' 2014 offense was among the worst in the Big 12, averaging just 21.4 points. Swoopes played a big part in that dubious distinction, throwing 11 interceptions against 13 touchdowns and coughing up some costly fumbles. It came to a head with his five turnovers against TCU. In the bowl game against Arkansas, Texas managed just 59 total yards.

Swoopes took the blame from fans for most of it. He was neither the runner the fans wanted to the passer the Longhorns needed.

But he also had his defenders. Watson, his position coach, nearly came to tears when describing how hard Swoopes worked in the offseason. And his teammates describe a new quarterback in the huddle, even if his public persona appears the same.

"We're all rallying around him. That guy has done a complete 180, and for the better," senior running back Jonathan Gray said.

Swoopes faces some of the same challenges he did last year. Texas will start two freshmen offensive lineman. He's got to find a new go-to receiver. And he'll have to find any tendency to look over his shoulder for Heard.

Strong said Heard will play against Notre Dame, suggesting the Longhorns have drawn up specific plays or situations for him.

But Swoopes will get the start. The Longhorns will be his team when they take the field against the Fighting Irish.

"I've said the guy that wins the quarterback position has to win over the team," Strong said. "And he's won over the team. It's going to be fun to watch him."