There was more flooding in Garland in the same area where a woman's car was swept away on Saturday night. Her body was found several hours later downstream. There was also more heavy rain in Plano, where flash flooding on Saturday left a teenager trapped in his car for an hour before he was rescued.

GARLAND, Texas - Garland officials say the spot a woman in a vehicle was swept away over the weekend was not flooded when it was checked out just an hour before the deadly incident.

The sedan attempted to cross a bridge in the 1700 block of Holford Road in the northern part of the city early Sunday morning, but got caught in flash flooding.

The female driver called 911 but wasn’t sure of her location. When fire crews determined where she was, they were on scene 3 minutes later -- but were unable to reach her.

First responders later found her car 300 yards downstream and her lifeless body was caught in a tree. She was identified Monday as Rita Jo Vinson, 49, a resident of Greenville.

Barineau says the city streets department operates and maintains the gates, but first responders have the authority to close them if they see a problem. 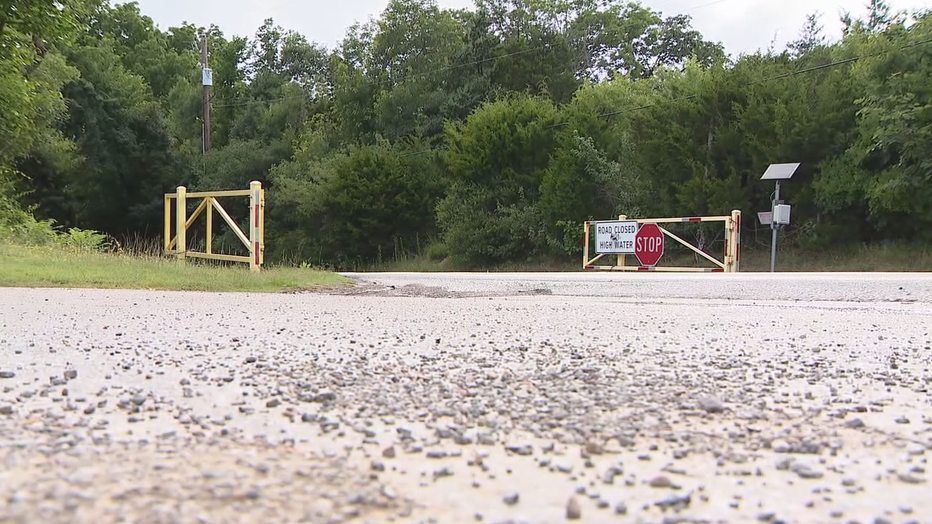 He says firefighters went by the bridge an hour before the woman’s 911 call and the water wasn’t a concern.

"They looked at the bridge and the water was actually three to five feet below the bridge level at that time and there was no need to shut the bridge at that point in time," Barineau said.

He adds, normally the city streets department can close gates in anticipation of heavy rainfall, but that was not the expectation.

"It was such a flash flood that there was not an expectation of it coming right then and there in Garland," Barineau said.

RELATED: Body found after woman called 911 as her vehicle was trapped in high waters in Garland

It was a similar situation early Sunday in West Plano. Water has receded at Winding Hollow and Seascape Lanes, but debris shows just how high it got when it crested a spillway and clogged a drain below.

That’s where 18 year old Reid McCulough — who happened to capture the experience on his dash cam — narrowly escaped with his life early Sunday morning. It shows just how quickly water took over his car.

"Outside of the car the water level was probably up to my door handle and in the car after a few minutes it started to seep in and flood my car. Over the next hour it got to basically my knees it was almost to where I was sitting," he said.

A spokesperson for the city of Plano says that area is not prone to flooding but was pummeled with six to seven inches of rain in matter of few hours late Saturday.

Engineers checked the area anyway to ensure there weren’t any other problems and found only minor drainage and erosion issues.