Surveillance photos show a possible suspect vehicle, a grey four-door car seen speeding away from the neighborhood around the time of the shooting.

DALLAS - Dallas police are looking for video and any leads on the killer who shot a woman in her own driveway on Memorial Day in North Dallas.

Leslie Baker was in her driveway on Royalton Drive near Preston Road and Royal Lane around 5 p.m. Monday when neighbors heard shots fired and called 911.

When officers arrived, they found 59-year-old Baker unconscious in her car. They were unable to revive her, and she was pronounced dead at the hospital.

Surveillance photos show a possible suspect vehicle, a grey four-door car seen speeding away from the neighborhood around the time of the shooting. Police haven't released a suspect description, but Crime Stoppers is offering a reward for information.

On Tuesday morning, investigators returned to the crime scene to look for clues. They are investigating a murder that looks like it could have been an attempted robbery or carjacking.

“We were sitting in our patio around 5 o’clock. It was Memorial Day, so we were having hot dogs,” recalled neighbor Dee Birdwell. “And we just heard a loud, I’m gonna say, pop at this time because we didn’t realize it could have been a shot. But that’s what we heard.” 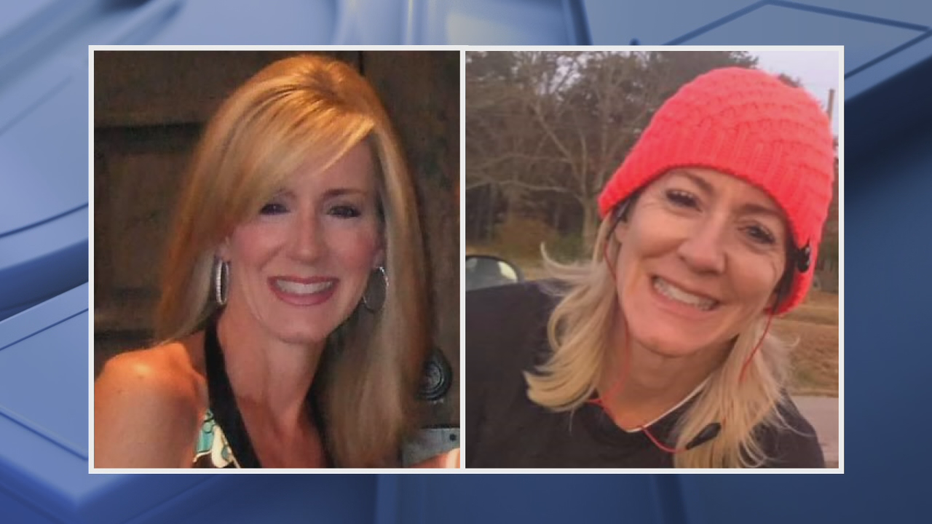 Baker was sitting in her car on her driveway and on the phone with a friend who reportedly heard her say she was being robbed before the phone went silent. Family members inside the house apparently heard nothing.

“Around five, I heard a series of pops that sounded like a gun,” said Eddie Jenkins, who heard the gunshots. “First, it was a loud boom, and then a second, following that then a rapid ‘Pow! Pow! Pow! Pow!’”

In a neighborhood were plenty of people run, bike and walk, Dallas police were trying to run down leads. Detectives are going door-to-door asking anyone if they heard or saw anything. They are combing the streets and uploading video from home and other surveillance cameras.

Dallas police are looking for video and any leads on the killer who shot a woman in her own driveway on Memorial Day in North Dallas.

People in the area who didn't want to interview say there was a gray vehicle leaving the neighborhood at a high rate of speed about the time this was happening.

Bob Buschardt says the Bakers were loved in the neighborhood where a lot of the people know each other.

“Leslie and Robert threw the first big parties that the neighborhood had here years and years ago,” he recalled. “They had Dickey’s Barbecue out here, and the whole street was party central.”

Steve Stoler and his wife, Susan Stoler, have known Baker and her family for years. Susan graduated high school with Baker in 1979.

“Always had a smile on her face. Very approachable,” Susan said. “Always made you feel so warm and always feeling like she was your friend.”

“These terrible tragedies and crimes happen all the time,” Steve said. “Sometimes you take for granted who’s touched by those tragedies until it happens to someone who’s close to you.”

"We're shocked and heartbroken by Leslie's senseless death,” her boss said in a statement. “I personally have known and worked with Leslie for many years, and her tragic passing is very difficult to understand and accept.”

“It’s really said and tragic,” said neighbor Scott Purcell. “In October, a tornado went through this whole area. A lot of people were devastated by that. And then to hear something like this happened at five o’clock on a Monday holiday afternoon is really sort of tragic and sad.”

Police are hoping the photos the possible suspect vehicle lead them to the person who killed Baker - who leaves behind her two young adult children and husband.

“We just want the police to do their work and be diligent and find out who’s responsible for this tragedy,” Steve said.

Baker was a wife and mother of two adult children.

A $5,000 reward is being offered in the search for Baker’s killer. Detective Esteban Montenegro is leading the investigation. If you know something or think you do, call him at 214.671.3624.