Watch the countdown as actor William Shatner and three others were launched into space aboard a Blue Origin rocket on Oct. 13, 2021.

The suborbital spaceflight, courtesy of Blue Origin founder and "Star Trek" fan Jeff Bezos, lifted off just before 10:50 a.m. ET from West Texas. Shatner, 90, officially became the oldest person in space and was joined by three others — two of them paying customers — for the quick flight.

Wednesday’s up-and-down space hop lasted 10 minutes, with the fully automated capsule reaching about 66 miles before parachuting back into the desert.

"Everybody in the world needs to do this," Shatner said after exiting the capsule. "It was unbelievable... I hope I never recover from this."

Actor William Shatner, known to many "Star Trek" fans as Captain James T. Kirk, rocketed into space aboard a Blue Origin flight. After exiting the capsule, Shatner struggled to find the words to describe the experience while speaking with Blue Origin founder, Jeff Bezos.

The flight was previously scheduled for Tuesday but postponed due to forecasted winds in the area. Wednesday’s launch was originally set for 10 a.m. but was delayed again by about 50 minutes.

Shatner, who rose to fame for his portrayal as Captain Kirk in the iconic franchise, has also written a series of books chronicling his experience in the role. The actor has previously expressed an interest to go into space — but also noted some nerves ahead of the launch.

However, after exiting the capsule, Shatner was filled with emotion describing the experience to Bezos and others who greeted the crew in the desert.

"What you have given me is the most profound experience I can imagine," Shatner told Bezos through tears. "I’m so filled with emotion about what just happened."

RELATED: William Shatner in space: Celebrate the icon with these free movies

Amid the celebrations, which included popping a bottle of champagne, Shatner continued to share a moving account of his experience. He noted seeing the "comforter of blue" that surrounds Earth.

"Then suddenly you shoot through, as you whip a sheet off of you when you’re asleep, and you’re looking into blackness — into black ugliness," he said. "There is the mother of Earth and comfort, and there is — is there death? Is that the way death is?"

Shatner was joined on the flight by Audrey Powers, Blue Origin’s vice president of mission and flight operations, and two entrepreneurs who bid unsuccessfully for a seat on the previous flight with Bezos, the founder of Amazon. Blue Origin did not share their ticket prices. 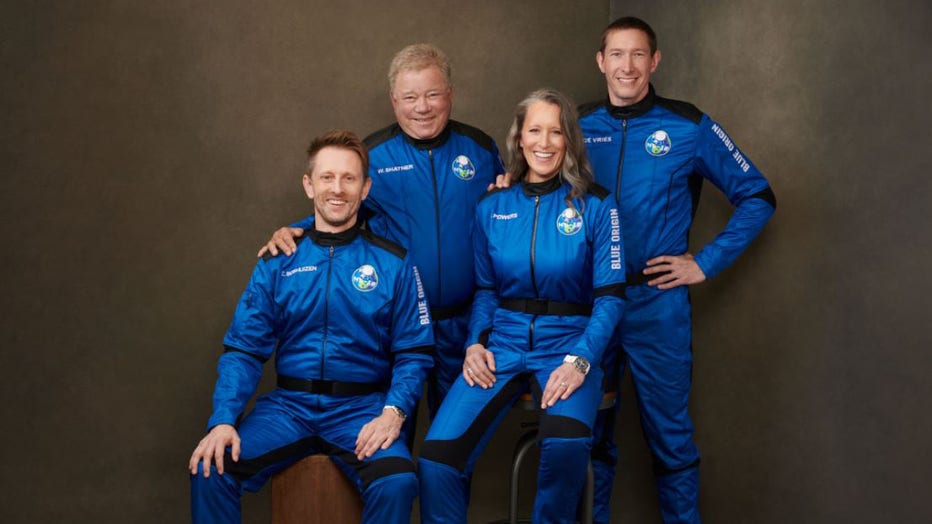 Bezos, who also founded Amazon, was on the company’s debut flight in July, along with his brother and the youngest and oldest to fly in space. Shatner will break the oldest threshold by six years.

Wally Funk, an 82-year-old female aviation pioneer, made history then as the oldest to reach space. She was one of 13 female pilots who went through the same tests as NASA’s all-male astronaut corps in the early 1960s but never made it into space at the time because only men were allowed.

"We went right on up, and I saw darkness," Funk said of her historical moment this summer. "I’ve been waiting a long time to finally get up there."

Last week, the Russians sent an actor and film director to the International Space Station for movie-making.