Hear the astronauts inside Blue Origin's New Shepard as they passed the Kármán line.

Shatner, 90, will become the oldest person in space and will join three others — two of them paying customers — on the blast-off from West Texas. It will be the company’s second launch with a crew.

"I’ve heard about space for a long time now. I’m taking the opportunity to see it for myself. What a miracle," Shatner said in a statement. 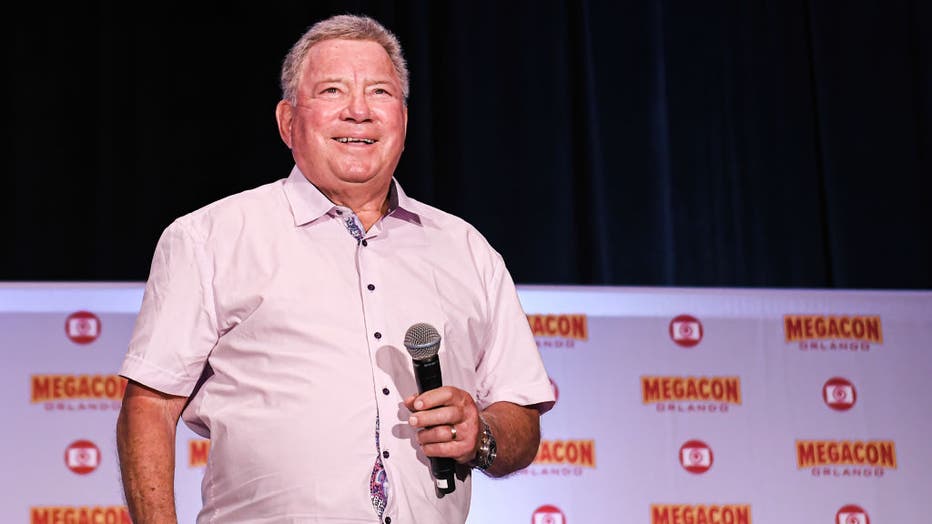 FILE - Actor William Shatner, best known for his portrayal of Captain James T. Kirk of the USS Enterprise in the Star Trek television series and movies, speaks at a Q&A session on the opening day of MEGACON at the Orange County Convention Center

A former NASA engineer who founded a nanosatellite company, the co-founder of a software company specializing in clinical research and a Blue Origin employee will also join the flight with Shatner. The up-and-down space hop will last 10 minutes and reach no higher than about 66 miles.

Bezos, who also founded Amazon, was on the company’s debut flight in July, along with his brother and the youngest and oldest to fly in space. Shatner will break the oldest threshold by six years.

Shatner, who rose to fame for his portrayal as Captain Kirk in the iconic franchise, has also written a series of books chronicling his experience in the role.

The actor has previously expressed an interest to go into space, tweeting a photo of himself superimposed in a spacesuit in May.

During a panel discussion called "Back to the Moon and Beyond With NASA" at San Diego Comic-Con 2020, Shatner also hinted at the possibility of going on a commercial spaceflight in the future.

"There's a possibility that I’m going to go up for a brief moment and come back down," Shatner said, according to FOX Business. But he cited a history of accidents as his main apprehension holding him back, such as the "O-ring thing" — which refers to a rocket booster seal that was found to have failed during the 1986 Challenger mission disaster.

Shatner will fly on Blue Origin’s New Shepard NS-18 for the upcoming trip, currently scheduled for liftoff at 8:30 a.m. CDT.

"I was part of the amazing effort we assembled for New Shepard’s Human Flight Certification Review, a years-long initiative completed in July 2021. As an engineer and lawyer with more than two decades of experience in the aerospace industry, I have great confidence in our New Shepard team and the vehicle we’ve developed," Powers said in a statement.

Exiting the capsule: Blue Origin crew successfully back on Earth | LiveNOW from FOX

Cheers erupt as family members of the four astronauts launched to space in Blue Origin's New Shepard hug them as they exit the capsule.

The company's 60-foot New Shepard rocket launched July 20 with its first human passengers, accelerating toward space at three times the speed of sound before separating from the capsule and returning for an upright landing. The passengers experienced just a few minutes of weightlessness before their capsule then parachuted onto the desert.

Wally Funk, an 82-year-old female aviation pioneer, made history as the oldest to reach space. She was one of 13 female pilots who went through the same tests as NASA’s all-male astronaut corps in the early 1960s but never made it into space at the time because only men were allowed.

"We went right on up, and I saw darkness," Funk said of her historical moment this summer. "I’ve been waiting a long time to finally get up there."

History was made on Wednesday as the world's first all-civilian crew launched into orbit. SpaceX's Inspiration4 mission launched on Wednesday, September 15 from Launch Complex 39A at NASA's Kennedy Space Center in Florida.

Bezos founded Blue Origin in 2000 in Kent, Washington, near Amazon’s Seattle headquarters. The company is working on a massive rocket, New Glenn, to put payloads and people into orbit from Cape Canaveral, Florida. It also wants to put astronauts back on the moon with its proposed lunar lander Blue Moon.

Other companies founded by billionaires looking to beef up space tourism have entered the race, including Richard Branson’s Virgin Galactic and Elon Musk’s company SpaceX.

RELATED: Bezos offers to cover $2B in NASA costs in exchange for moon mission contract