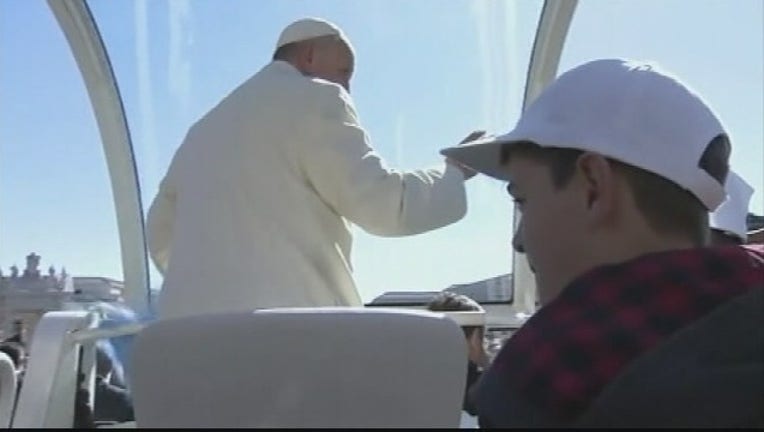 WASHINGTON (AP) — When Pope Francis arrives on his first-ever visit to the United States, he will be welcomed in a way that few world leaders have: with President Barack Obama waiting at the bottom of the airplane stairs to greet him.

The extraordinary gesture on Sept. 22 is just the beginning of the pomp and protocol that Washington will put on display to welcome the popular leader of the world's 1.2 billion Roman Catholics and the head of Vatican City.

The next day, Francis will be just the third pope to visit the White House, being greeted as most heads of state are, with his car pulling slowly up the South Lawn's driveway to the spot where a red carpet will be rolled out and Obama and his wife, Michelle, will be waiting.

Thousands of invited guests, including many Catholics, will also be waiting on the lawn to welcome Francis.

"Like millions of Americans, I am very much looking forward to welcoming Pope Francis to the United States," Obama told a prayer breakfast this year.

The president and the pope met for the first time in March 2014 at the Vatican, and Obama has been outspoken about his admiration for the 78-year-old native of Argentina. Despite differences over abortion, the two have found common ground on such issues as U.S. policy toward Cuba and Iran, climate change, and poverty and income inequality.

Nothing that happens behind the iron gates of 1600 Pennsylvania Ave. on the late-September morning of Francis' visit will come as a surprise to the Holy Father since it is standard practice for White House staff, including from the first lady's and social secretary's offices, to work out the details of appearances like these with the visitor's representatives ahead of time.

"So much of arrival ceremonies are steeped in history and tradition," said Anita McBride, who was an assistant to President George W. Bush, who received Pope Benedict XVI at the White House in April 2008. "Every arrival ceremony is important. Every single foreign visitor is treated with the same level of respect and planning."

Francis has shown little interest in protocol and the trappings of his office, shunning both the fancy papal apartment and motorcade, for example. But he does put himself through the motions of diplomatic etiquette to be respectful of his hosts.

The motions at the White House for Francis will last for about 90 minutes, the sum total of the pontiff's visit.

Shortly after he arrives on the South Lawn, the anthems of the U.S. and the Vatican will play following military honors that include a 21-gun salute and band members dressed in colonial garb. Obama will welcome the pope with remarks followed by a reciprocal address from Francis. They will then head inside the White House and reappear on the balcony.

Inside, Francis will sign the official guest book. He and Obama will exchange gifts before their Oval Office meeting.

While a handshake is considered an appropriate way to greet Francis, Catholics have the option of kissing the gold ring the pope wears on his right hand, according to the State Department protocol office. Vice President Joe Biden, a devout Catholic, opted not to kiss the ring after he attended Francis' installation Mass at the Vatican in March 2013.

Dark-colored clothing is recommended for the occasion. Hemlines must cover knees; sleeves must hide elbows.

Francis should also be addressed as "Your Holiness."

Popes and U.S. presidents share a nearly 100-year history of interaction, with more than two dozen meetings since the first one at the Vatican on Jan. 4, 1919, between President Woodrow Wilson and Pope Benedict XV after World War I.

Benedict's visit was doubly memorable because it fell on his 81st birthday. More than 13,500 people who were invited to the South Lawn for the official welcoming ceremony, one of the largest crowds ever put together by the White House, sang "Happy Birthday" twice to the German-born pope. The White House pastry chef also presented Benedict with a tiered birthday cake.

Bush and his wife, Laura, greeted Benedict at Andrews Air Force Base in Maryland upon his arrival in the U.S. The military base just outside of Washington is the official point of entry for visiting foreign dignitaries.

Obama travels there regularly for his out-of-town trips, but rarely goes just to welcome visitors. An exception came last year when Obama met French President Francois Hollande at Andrews. They immediately flew to Charlottesville, Virginia, for a visit.

Obama will be accompanied next week by his wife.

"The president definitely wanted to do this" for Francis, White House spokesman Eric Schultz said.