Abel Gallegos became the man behind some of the largest stadiums in the country. He was the lead builder of AT&T Stadium, Kyle Field in College Station, American Airlines Center and Globe Life Field, which opened last year.

DALLAS - A North Texas man who helped build some of the most iconic North Texas locations died from COVID-19.

64-year-old Abel Gallegos was not vaccinated. His family buried him Monday.

If you’ve been to a sporting event in Dallas, you’ve likely seen Abel’s work — like the American Airlines Center.

Jaime Gallegos says his father is forever etched in the history of Dallas sports.

The 64-year-old worked in construction for the last 40 years. Now, Abel’s portfolio can be seen across DFW. His finest achievement was being the general foreman for the construction of AT&T Stadium, where a brick lies out front with his name on it. 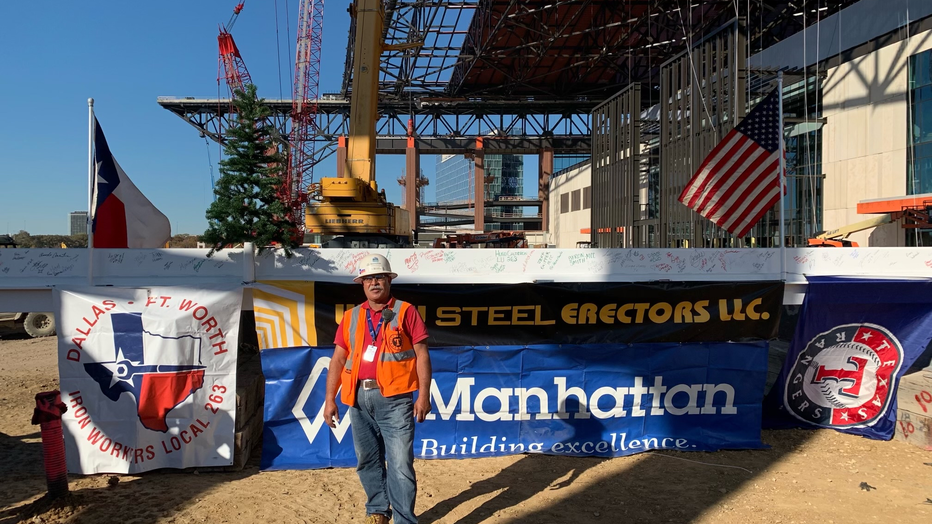 "On the day that he passed, we went to go visit the stadium to see his name engraved in there. It was a proud moment for him," Jaime said.

Abel along with his wife tested positive in mid-November. Two weeks later, his wife recovered, but he was rushed to Baylor Scott and White in Waxahachie when one morning his body gave up.

Jaime remembers one of his final conversations with his dad.

Neither Abel nor his wife were vaccinated. His son says that hesitancy within the family may now be gone.

"We never felt that it was going to attack our family this way," Jaime said. "Now, the conversations have switched to go where we might consider it."

Abel and his wife moved from Mexico to Texas back in 1979. Both became U.S. citizens and built their life from the ground up in Dallas.

Abel became the man behind some of the largest stadiums in the country. He was the lead builder of AT&T Stadium, Kyle Field in College Station, American Airlines Center and Globe Life Field, which opened last year.

"That’s the reason my dad is the heart of the ballpark," Jaime said. "Because of his heart and his craft and what he loved to do."

Jamie, who is a father and a huge Rangers fan himself, is proud to show off his dad’s work.

"Yeah, it will be more meaningful," he said.

Abel leaves behind five children, 21 grandchildren and three great-grandchildren. He was buried in Waxahachie, where he lived with his wife.