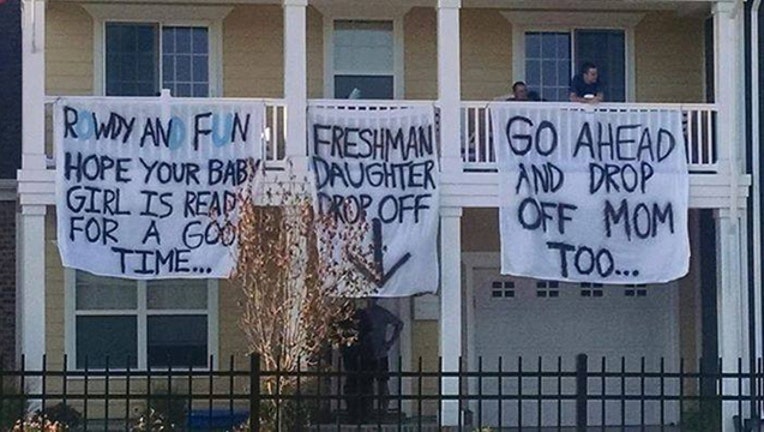 The president of a Virginia college is “outraged” and has pledged action after several vulgar signs directed at incoming female students -- and their mothers -- were draped from the ledges of nearby off-campus houses.

The bawdy banners were handwritten on what looked like large, white bed sheets and hung from porch ledges of private housing near the Norfolk, Virginia campus.

“Rowdy and fun hope your baby girl is ready for a good time…”, “Freshman daughter drop off” and “Go ahead and drop off mom too…” were three of the signs captured in a picture posted to Facebook and preserved in a screengrab by the Huffington Post. The Facebook post has since been deleted.

“I said at my State of the University address that there is zero tolerance on this campus for sexual assault and sexual harassment,” Old Dominion University President John R. Broderick wrote in a Facebook post. “This incident will be reviewed immediately by those on campus empowered to do so. Any student found to have violated the code of conduct will be subject to disciplinary action.”

Broderick said at least one young student he talked to “thought seriously about going back home” after seeing the “offensive message.”

“An incident occurred this weekend that does not reflect the university’s commitment to the prevention of sexual assault and dating violence,” the Facebook message said. “Not only do these actions taken by a few individuals undermine the countless efforts at Old Dominion University to prevent sexual assault, they are also unwelcoming, offensive and unacceptable.”