He wasn’t expected to live, but the determined dad wasn’t going to miss a major milestone: the birth of his daughter.

Ashley Rodriguez of Glen Heights is recalling the devastating afternoon of October 1. Her husband, 35-year-old Robert Rodriguez, is a father to two boys and a beloved biology teacher at Waxahachie High School.

"I became a teacher because it’s something I've been wanting to do since seventh grade.

Robert was returning to work on his motorcycle after a quick lunch at home when he collided with an 18-wheeler turning in front of him. He suffered catastrophic injures to his midsection. His is hip bone was sheered from his spine on one side, and multiple fractures on the other. Fifty surgeries in five months, he’d lose his left leg.

At the time of the accident, Ashely was two months pregnant with their third child.

"Particularly for Robert, its managing the complex wounds that he suffered from the accident," said Mike McCalister, CEO of Select Specialty Hospital.

"There were no ands, ifs or buts about it," Robert said. "I had to be there to see my baby girl be born."

Robert's recovery has been grueling and nothing short of miraculous. His sheer determination and a bit of behind-the-scenes orchestrating ensured this father of two boys would be there to add girl dad to his resume.

On Thursday, Ashely delivered baby Alysia Hope at Baylor. Robert was wheeled over from the specialty hospital. The two elated parents were in side-by-side beds. 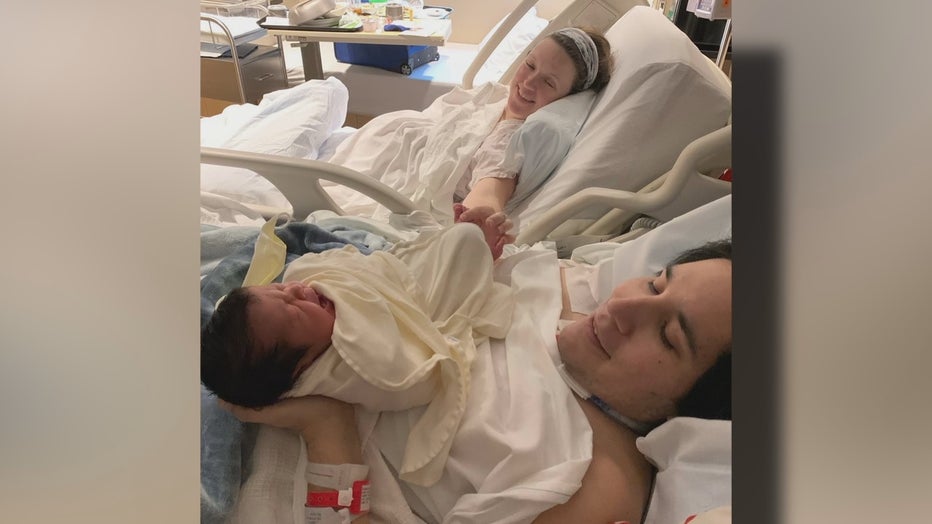 Robert and Ashely continue to lean on their faith, family, friends which now include legions of doctors and nurses.

It’s unclear when Robert will finally go home. But until then, he’s got the sweetest kind of motivation.

"She's the new love of my life," he said. "I love my wife so much. But this baby girl, I got to protect her. I want to protect her and provide for her as much as anything."