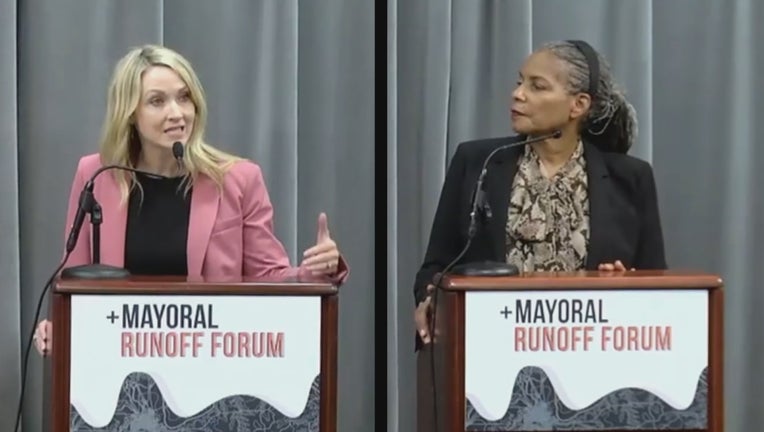 FORT WORTH, Texas - The race for a new mayor in Fort Worth is down to two candidates.

In the election earlier this month, Deborah Peoples garnered 33% of the vote. Mattie Parker was not far behind with 31%.

Peoples is the former chair of the Tarrant County Democratic Party. If elected, she would be Fort Worth’s first Black mayor.

Parker is a former aide to outgoing Mayor Betsy Price. She was endorsed by Price, who decided not to seek re-election after 10 years in office.

The two candidates joined FOX 4's Good Day Tuesday morning to talk about where they stand on issues like police relations and the costly Panther Island project.

A very crowded field of candidates is down to just two in the election to decide the next mayor of Fort Worth. Deborah Peoples and Mattie Parker joined Good Day to talk about where they stand, including on community and police relations.

This summer, former Fort Worth police officer Aaron Dean will go on trial for the murder of a young Black woman – Atatiana Jefferson. Good Day's Tim Ryan asked the candidates how they would reach out to folks who will not be satisfied with anything less than a guilty verdict.

Parker called the moment Jefferson was killed a stain on the history of Fort Worth.

"I’ve talked a lot about the intention of this summer really making sure we communicate with our residents what that trial will look like," she said. "It is imperative that your leader, your next mayor leads with unity. A focus on less divisiveness and really working in the trenches alongside different community groups to understand what’s going to proceed with the trial of Aaron Dean. And I know I have the experience to do that."

When it comes to the relationship between Fort Worth police and the communities they serve, Peoples said she believes many of the city’s police officers are valued and respected.

"But I do think that there are some underlying tensions in communities of color that we have to address. And so I am out there doing that. I think you know, Tim, my brother was a policeman. My sister was a constable. I have a unique perspective as a woman of color and in a family of law enforcement. And so I’ve been out in the community saying, ‘Let us heal. Let us come together. Let us make sure that we are addressing your concerns in the community but that we are building a better relationship between not only our police department but our communities," she said.

Parker said first and foremost, Fort Worth has one of the finest police departments in the United States and she hears from residents even if they don’t have perfect interactions that they love the officers and understand that the bedrock principle of any city is a safe city.

"We have professionals that are working on really healing and bringing police and community together – a police monitor’s office led by Kim Neal, a new police chief, Chief Neal Noakes and his command staff. I want to allow the professionals to really do the work and make sure as mayor I’m really supporting them at what it looks like to have true community policing and healing across the city of Fort Worth," she said.

The two candidates for Fort Worth mayor joined Good Day to talk about the issues. Deborah Peoples and Mattie Parker shared their thoughts on the future of the ambitious and costly Panther Island project.

There has been some progress on the Panther Island project, a $1.2 billion idea that depends heavily on federal funding.

"If it’s such a great idea, why doesn’t private enterprise build it, pay for it and along with the city benefit from it?" Tim Ryan asked the candidates.

Parker said she thinks they should.

"That’s one of the first things I’ll do as mayor is bring together the jurisdictions that oversee the project – the city of Fort Worth, Tarrant County and the Tarrant Regional Water District – to work together in cooperation. We need a Plan B if we can’t get the federal funds. And right now in Fort Worth, Texas I know we do best when we have private/public partnerships so we’re going to do that with this project," she said.

Parker called it transformative for Fort Worth, doubling the size of downtown.

"But we have to acknowledge that without federal funding it should not be on the backs of our local taxpayers," she said. "It’s imperative that we bring world-class developers to the table here in Fort Worth to reinvasion that project and the possibilities both with the private land that’s currently held and the land held by TRWD."

People’s feels confident the federal funding will be available.

"We’re gonna get that money with hard work. And so there are two parts to the project and I want people to remember that. The first part, Tim is the flood control project and that’s the part that we have to work with not only our state government with the water district and with the federal government to make sure that we’re saving lives. That whole project came about because of flooding," she said.

Peoples agreed the second part of the project is that public/private partnership.

"We have to bring people to the table and the taxpayers should not be paying for that. So there are two pieces to it. I recognize that as a candidate for mayor. When I become mayor I’m going to work to make sure that we save citizen’s lives by making sure that the appropriate strategies are put in place to prevent flooding and then we’ll move forward with bringing people to the table to look at that public/private piece of it," she said.