The alleged owner of a tiger in the Houston area is now in custody but police are still looking for the big cat.

HOUSTON - Police are trying to find a tiger that was seen roaming a west Houston neighborhood Sunday. The man last seen with it is in jail. He is an accused killer.

An attorney for the man arrested said the tiger does not belong to him. But video captured Sunday seems to tell a different story.

The tiger sighting shocked people in the west Houston neighborhood. At one point, an off-duty sheriff’s deputy who lives nearby pulled a gun on the animal.

As it started walking toward the deputy, a man yelled not to shoot and led the tiger inside a home. He loaded the tiger into a Jeep and drove away before the police arrived. 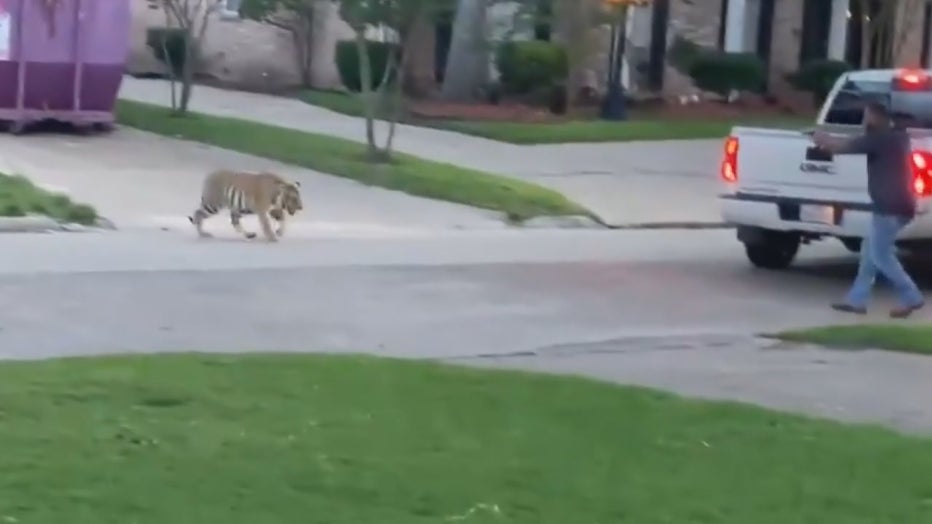 Police identified the man with the tiger as 26-year-old Victor Cuevas. He’s facing an unrelated murder charge and has been out on bond since November.

He was arrested Monday night but police still have not found the tiger.

"This case is not what it seems. It is not my client’s tiger," said Michel Elliott, Cuevas’s attorney.

Carole Baskin, an animal rights activist and star of the Netflix series "Tiger King" said she’s not surprised by the incident. She said there needs to be tougher laws against private ownership of exotic animals.

"Clearly this cat was wandering around because somebody left it unattended. They probably thought the backyard fence was high enough and didn’t realize the tiger could hop it like that," she said.

Tigers are not allowed inside Houston city limits, except for in an accredited zoo. It’s a Class C misdemeanor for those caught violating the law.

Cuevas's attorney did not explain his connection to the animal.

He is facing a charge of evading arrest in this case. The unrelated murder charge is for a 2017 shooting.