Vice President Kamala Harris encouraged everyone to get their shots after receiving her second dose of the Moderna COVID-19 vaccine, Tuesday.

WASHINGTON - Vice President Kamala Harris and second gentleman Doug Emhoff got their second round of the COVID-19 vaccine Tuesday.

After receiving the shot, Harris joked, "when are you gonna put it in?" She called it "relatively painless."

Harris encouraged Americans to get the vaccine, describing it as "something that will save your life and the life of your family and the community."

The vice president received the first dose on Dec. 26 as part of a growing effort to encourage the public to trust both the Moderna and Pfizer vaccines.

Biden already received his second dose on Jan. 11, well ahead of Inauguration Day.

Biden received his first shot on Dec. 21 at a hospital not far from his Delaware home. His wife, Jill Biden, was also vaccinated. The U.S. Centers for Disease Control and Prevention recommends the Pfizer shots be administered 21 days apart and the Moderna shots should be taken between one month to 28 days apart.

Amid a vaccine rollout rife with confusion and shortages, the White House planned to hold a call with governors Tuesday to discuss the vaccine supply. 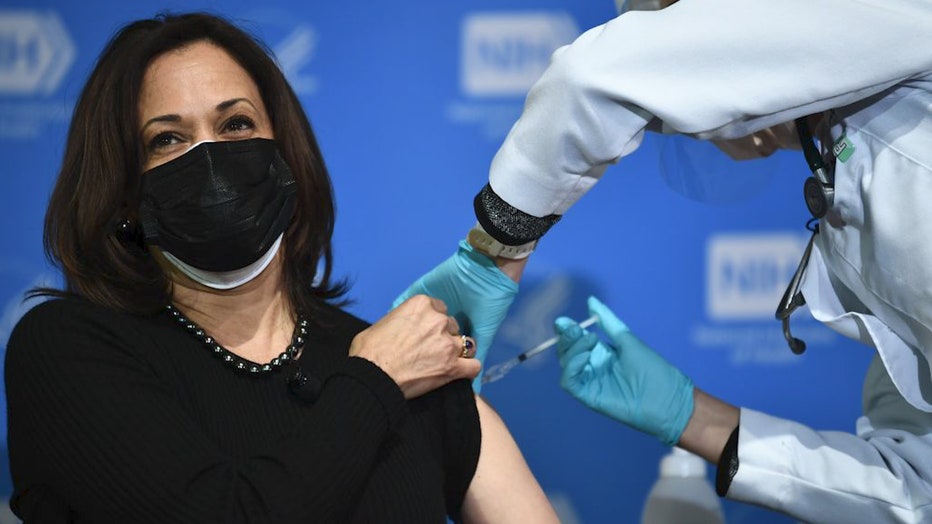 FILE - US Vice President Kamala Harris receives her second dose of the Covid-19 vaccine at the National Institutes of Health, in Bethesda, Maryland, on Jan. 26, 2021.

The setup inherited from the Trump administration has been marked by miscommunication and unexplained bottlenecks, with shortages reported in some places even as vaccine doses remain on the shelf.

The U.S. ranks fifth in the world in the number of doses administered relative to the country’s population, behind No. 1 Israel, United Arab Emirates, Britain and Bahrain, according to the University of Oxford.

The reason more of the available shots in the U.S. haven't been dispensed isn't entirely clear. Some state officials have complained of a lag between when they report their numbers to the government and when the figures are posted on the CDC website.

Nationwide, about 19.3 million people, or less than 6% of the U.S. population, have received at least one dose of the vaccine, including about 3 million who have gotten the second shot, according to the CDC. About 55% of the 41 million doses distributed to the states by the federal government have been injected into arms, by the CDC's count.

The virus has killed over 419,000 Americans and infected more than 25 million, with a widely cited University of Washington model projecting the death toll will reach about 569,000 by May 1.

Meanwhile, health experts are also worried about several new COVID-19 virus variants that are making their way to U.S. from the U.K and South Africa. These new strains are showing preliminary evidence of being more transmissible and potentially more deadly.

A variant from Brazil was detected for the first time in the U.S. in a Minnesota resident who recently traveled to the South American country, state health officials said Monday.

The more the virus spreads, the more opportunities it has to mutate. The fear is that it will ultimately render the vaccines ineffective.

To guard against the new variants, Biden on Monday added South Africa to the list of more than two dozen countries whose residents are subject to coronavirus-related limits on entering the U.S.Most non-U.S. citizens who have been to Brazil, Ireland, Britain and other European nations will be barred from entering the U.S. under the rules re-imposed by Biden after President Donald Trump had moved to relax them.

He said there is "a very slight, modest diminution" of the effectiveness of COVID-19 vaccines against those variants, but "there’s enough cushion with the vaccines that we have that we still consider them to be effective" against both.